The Science of Liberty: Democracy, Reason, and the Laws of Nature (Paperback) 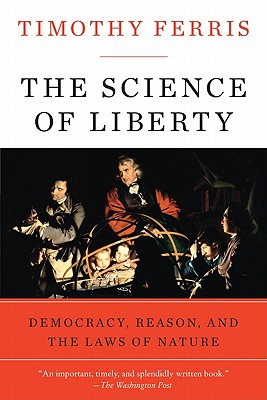 In his most powerful book to date,award-winning author TimothyFerris makes a passionate case for scienceas the inspiration behind the rise of liberalismand democracy. Ferris showshow science was integral to the AmericanRevolution but misinterpreted inthe French Revolution; reflects on thehistory of liberalism, stressing its widelyunderestimated and mutually beneficialrelationship with science; and surveysthe forces that have opposed scienceand liberalism—from communism andfascism to postmodernism and Islamicfundamentalism. A sweeping intellectualhistory, The Science of Liberty is a stunninglyoriginal work that transcends theantiquated concepts of left and right.

Timothy Ferris's works include Seeing in the Dark, The Mind's Sky (both New York Times best books of the year), and The Whole Shebang (listed by American Scientist as one of the one hundred most influential books of the twentieth century). A fellow of the American Association for the Advancement of Science, Ferris has taught in five disciplines at four universities. He is an emeritus professor at the University of California, Berkeley and a former editor of Rolling Stone. His articles and essays have appeared in The New Yorker, Time, Newsweek, Vanity Fair, National Geographic, Scientific American, The Nation, The New Republic, The New York Review of Books, The New York Times Book Review, and many other publications. A contributor to CNN and National Public Radio, Ferris has made three prime-time PBS television specials: The Creation of the Universe, Life Beyond Earth, and Seeing in the Dark. He lives in San Francisco.

“Unfashionably optimistic. . . . Ferris provides irrefutable evidence that, despite the tragedies of war and terrorism, there has been astounding progress in both the living standards and the degree of personal freedom enjoyed by the majority of the human race.”
— The Financial Times

“Engaging. . . . Ambitious. . . . Ferris usefully reminds us that science was an integral part of the intellectual equipment of the great pioneers of political and individual liberty.”
— The New York Times Book Review

“An important and extremely readable book. . . . Lively. . . . Clear and perceptive. . . . Ferris is one of America’s most skillful communicators about science. . . . He shows himself a fascinating historian too.”
— The San Francisco Chronicle

“An important, timely, and splendidly written book. . . . Ferris is among the half-dozen foremost explicators of the physical sciences alive today. . . . The Science of Liberty is a profound delight.”
— The Washington Post