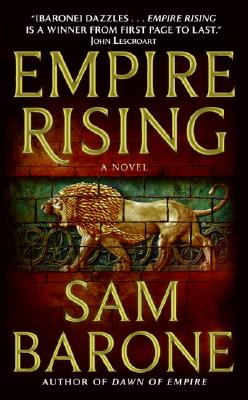 Into this violent, unsettled land come the outcast Korthac and the remnants of his mighty desert fighters. Joining forces with Ariamus and his brutal band of thieves, the invaders set their sights on the biggest prize of all: the burgeoning city of Akkad—already renowned for its riches . . . and for the courage and wisdom of its two leaders.

The former barbarian, Eskkar, and his beloved wife, Trella, face a challenge far more daunting than the savage horde that previously threatened the young city they built together and have sworn to protect. For, while Eskkar roams the land, hoping to bring other towns into his growing empire, an insidious menace is slipping unnoticed into Akkad, intending to wreak havoc from within—to loot and enslave . . . and bring death.

Sam Barone was born and raised in New York City. He spent thirty years designing and developing software, and began writing seriously after his retirement. He lives in Scottsdale, Arizona.

“EMPIRE RISING is a winner from the first page to the last. Highly recommended.” — John Lescroart

“If Bernard Cornwell and Diana Gabaldon decided to collaborate on a novel, the result would be something like this.” — Arizona Republic

“[A] compelling first novel ...Readers will find it hard to put down this dramatic tale of conflict.” — Library Journal