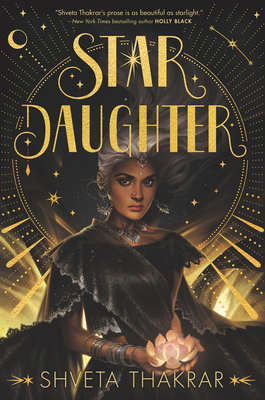 “Star Daughter follows Sheetal, a half-star, half-mortal girl. When her star power injures her human father, Sheetal must seek the help of her mother, a star who returned to the heavens long ago. Sheetal soon finds herself representing her family in a magical competition that will decide the next ruling house of heaven. A standalone fantasy, Star Daughter reads like a diverse version of Stardust that is all its own, taking inspiration from Hindu mythology. With prose the likes of Laini Taylor and Margaret Rogerson, Shveta Thakrar has a bright future in YA literature.”
— Isabella Ogbolumani, Buffalo Street Books, Ithaca, NY

This gorgeously imagined YA debut blends shades of Neil Gaiman’s Stardust and a breathtaking landscape of Hindu mythology into a radiant contemporary fantasy.

The daughter of a star and a mortal, Sheetal is used to keeping secrets. Pretending to be “normal.” But when an accidental flare of her starfire puts her human father in the hospital, Sheetal needs a full star’s help to heal him. A star like her mother, who returned to the sky long ago.

Sheetal’s quest to save her father will take her to a celestial court of shining wonders and dark shadows, where she must take the stage as her family’s champion in a competition to decide the next ruling house of the heavens—and win, or risk never returning to Earth at all.

Brimming with celestial intrigue, this sparkling YA debut is perfect for fans of Roshani Chokshi and Laini Taylor.

Shveta Thakrar’s debut novel, Star Daughter, is a standalone YA fantasy perfect for fans of Neil Gaiman, Laini Taylor, and Margaret Rogerson. Shveta's work has appeared in a number of magazines and anthologies, including Enchanted Living, Uncanny Magazine, and Toil & Trouble. You can find her online at www.shvetathakrar.com and on Twitter and Instagram at @ShvetaThakrar.

"Take a journey to the heavenly courts in this luscious, shimmering fantasy, so dripping with beauty and imagination you’ll want to eat it with a spoon.” — New York Times bestselling author Laini Taylor

"My favorite tales are the ones that sneakily draw you out of one world and slip you into the next. This is one of those. I emerged from Star Daughter dusted with constellations and wonder. Thakrar's imagination is a feast for the senses." — Roshani Chokshi, New York Times bestselling author of The Star-Touched Queen and The Gilded Wolves

“Nothing short of dazzling.” — Booklist

“An enchanting story about love, family, finding your voice, and searching for home. Thakrar’s sparkling command of language weaves magic on every page. This book is a joy, and will speak to anyone who yearns to belong.” — Claire Legrand, New York Times bestselling author of Furyborn and Kingsbane

“A magical debut full of wonder, wit, myths, and adventure. Reading Thakrar's words is like swimming through the most beautiful imagination—every page is a delight." — Natasha Ngan, New York Times bestselling author of Girls of Paper and Fire

"A gorgeously written tale of magic and family, of finding and fighting for your place, Star Daughter has a heart that shines as brilliantly as its celestial court." — S. A. Chakraborty, author of the bestselling Daevabad Trilogy

“Full of wonder and enchantment. Thakrar has crafted an excellent story about the power of the younger generations to carve their own path amidst the traditions and expectations of their elders.”  — Bulletin of the Center for Children’s Books

“Luminously beautiful, with a mythic heart.” — Tasha Suri, author of Empire of Sand

“Absolutely magical. Thakrar weaves her words so tightly around you that you are completely immersed in her world, a victim of its lyrical starsong.” — Ellen Oh, author of the Prophecy series and editor of A Thousand Beginnings and Endings

“Radiant. Readers will be enchanted by Sheetal and the starry court.” — Kristen Ciccarelli, internationally bestselling author of The Last Namsara

“A wondrous delight, Shveta Thakrar’s debut is a feast for the senses.” — Cindy Pon, author of Want and Serpentine

“Star Daughter is a love letter to every desi girl wanting to believe in her own magic.” — Tanaz Bhathena, author of A Girl Like That and Hunted by the Sky

“A luminous debut. Star Daughter’s sparkling coming-of-age tale of transformation and love is among the best kinds of fantasy: one that reminds us to reach for the stars while keeping our feet firmly on the ground.” — Fran Wilde, Nebula Award-winning author of The Bone Universe series and Riverland