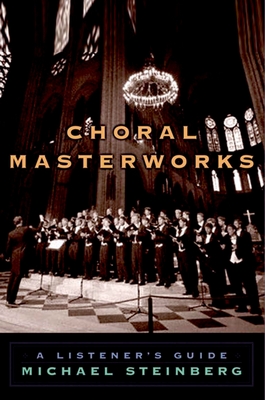 Michael Steinberg's highly successful listener's guides--The Symphony and The Concerto--have been universally praised for their blend of captivating biography, crystal clear musical analysis, and delightful humor. Now Steinberg follows these two greatly admired volumes with Choral Masterworks,
the only such guide available to this most popular of musical forms.
Here are more than fifty illuminating essays on the classic choral masterworks, ranging from Handel's Messiah, Bach's Mass in B Minor, and Beethoven's Missa solemnis, to works by Haydn, Brahms, Mendelssohn, and many others. Steinberg spans the entire history of classical music, from such
giants of the Romantic era as Verdi and Berlioz, to leading modern composers such as Elgar, Rachmaninoff, Vaughan Williams, and Stravinsky, to contemporary masters such as John Adams and Charles Wuorinen. For each piece, Steinberg includes a fascinating biographical account of the work's genesis,
often spiced with wonderful asides. The author includes an astute musical analysis of each piece, one that casual music lovers can easily appreciate and that more serious fans will find invaluable. The book also provides basic information such as the various movements of the work, the organization
of the chorus and orchestra, and brief historical notes on early performances.
More than twenty million Americans perform regularly in choirs or choruses. Choral Masterworks will appeal not only to concert goers and CD collectors, but also to this vast multitude of choral performers, an especially engaged and active community. What sets Steinberg's writing apart is its appealing mixture of impregnable authority (he knows this music) and purely personal asides (by the end of the book, we know this man). Choral Masterworks can be read by anybody, from a professional musician to any young listener newly braced by the stoic
pessimism of the Brahms 'German Requiem.' --Washington Post Book World

Michael Steinberg has taught at several universities and conservatories, was music critic of The Boston Globe, has contributed to numerous periodicals, and served as program annotator for the Boston Symphony Orchestra, San Francisco Symphony, Minnesota Orchestra, and New York Philharmonic. He livesin Minneapolis, Minnesota.