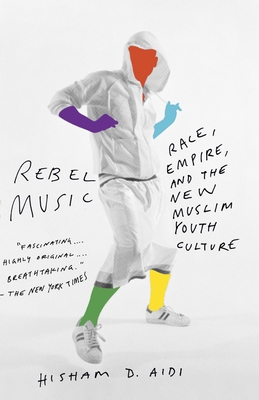 In this pioneering study, Hisham Aidi—an expert on globalization and social movements—takes us into the musical subcultures that have emerged among Muslim youth worldwide over the last decade.  He shows how music—primarily hip-hop, but also rock, reggae, Gnawa and Andalusian—has come to express a shared Muslim consciousness in face of War on Terror policies.
This remarkable phenomenon extends from the banlieues of Paris to the favelas of Rio de Janeiro, from the park jams of the South Bronx to the Sufi rock bands of Pakistan. The United States and other Western governments have even tapped into these trends, using hip hop and Sufi music to de-radicalize Muslim youth abroad. Aidi situates these developments in a broader historical context, tracing longstanding connections between Islam and African-American music. Thoroughly researched, beautifully written, Rebel Music takes the pulse of a revolutionary soundtrack that spans the globe.

Hisham D. Aidi is a lecturer at the School of International and Public Affairs and the Institute of African Affairs at Columbia University. He was a Carnegie Scholar and Global Fellow at The Open Society Foundation and is coeditor, with Manning Marable, of Black Routes to Islam.

“A marvel. . . . Hisham Aidi is a brilliant expositor of this powerful planetary cultural phenomenon.” —David Levering Lewis, author of God’s Crucible: Islam and the Making of Europe, 570-1215

“Mohammed meets Malcolm; Gnawa meets Guantanamo; Bandung meets B-boys; banlieues meet Bahia: this is the vibrant, noisy, embattled world Hisham Aidi brings to light. . . . In what can genuinely be described as a tour de force for its global scope, historical sweep, cultural virtuosity, and political sophistication, Rebel Music examines this soundtrack in a global context, from slavery to the latest war on terror.” —Robin D. G. Kelley, author of Thelonious Monk: The Life and Times of an American Original

“Rebel Music may be the most bafflingly significant book I’ve read in years.  It is a marvel. . . . Hisham Aidi is a brilliant expositor of this powerful planetary cultural phenomenon.” —David Levering Lewis, author of God’s Crucible: Islam and the Making of Europe, 570-1215

"Rebel Music offers an extraordinarily rich and variegated [musical] map . . . From Paris to Rio, from Philadelphia and Brooklyn to Morocco and southern Spain, Aidi is the peripatetic chronicler of the intricate intersecting musical and political worlds whose shared issues have never before been so cogently crystallized." —American Literary History

"Rebel Music has no antecedent or peer in musical historiography . . . [Aidi] acts as historian, musicologist, journalist and theologian, no easy juggling act . . . It is a virtuoso performance of historical knowledge and cultural observations, as Aidi jams on personalities and communities."
—Journal of the American Academy of Religion

“In this bracing, fascinating, and utterly timely exploration of music, race, and cultural identity, Aidi examines young European and American Muslims and their search for what he calls ‘a nonracist utopia’. . . . This book will be especially appealing to young people who want to better understand the Muslim perspective on war, prejudice, and national identity.” —Booklist (starred)

“A multilayered and intriguing story of the mobilization of Muslim youth through music rather than militancy. . . . Moving from jazz to the late Algerian pop star Salim Halali, Aidi’s wide-ranging, dense work persuades by its passionate accretion of detail.” —Kirkus Reviews