Mindwise: Why We Misunderstand What Others Think, Believe, Feel, and Want (Paperback) 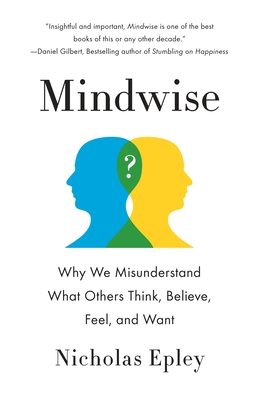 Mindwise: Why We Misunderstand What Others Think, Believe, Feel, and Want (Paperback)

Why are we sometimes blind to the minds of others, treating them like objects or animals instead? Why do we talk to our cars, or the stars, as if there is a mind that can hear us? Why do we so routinely believe that others think, feel, and want what we do when, in fact, they do not? And why do we think we understand our spouses, family, and friends so much better than we actually do?

In this illuminating book, leading social psychologist Nicholas Epley introduces us to what scientists have learned about our ability to understand the most complicated puzzle on the planet—other people—and the surprising mistakes we so routinely make. Mindwise will not turn others into open books, but it will give you the wisdom to revolutionize how you think about them—and yourself.

Nicholas Epley is the John T. Keller Professor of Behavioral Science at the University of Chicago Booth School of Business. He has written for The New York Times, and over 50 articles in two dozen journals in his field. He was named a “professor to watch” by the Financial Times, is the winner of the Theoretical Innovation Prize from the Society for Personality and Social Psychology, and was awarded the Distinguished Scientific Award for Early Career Contribution to Psychology from the American Psychological Association. He lives in Chicago.


“Animals and humans think, but only humans can understand what others are thinking. Without this ability, cooperative society is unimaginable. It’s a sixth sense, akin to mind reading, writes Epley in this clever psychology primer....Epley ably explores many entertaining and entirely convincing mistakes, so readers will have a thoroughly satisfying experience.” —Kirkus Reviews

“This book isn’t pop psychology but popularly written, genuine behavioral psychology, based on the findings of carefully constructed experiments. Its subject is the so-called sixth sense, by which humans descry what others feel, think, and know, and which we variously call intuition, sympathy, and mind reading. The experiments Epley describes verify its reality and, more important, that it isn’t nearly as reliable as we assume; indeed, it’s only modestly better than chance at rightly ascertaining particulars (e.g., opinions, preferences, details), even those of spouses, family members, and bosom friends….Useful!” —Booklist

“'Mindwise' is good reading for negotiators, the makers of public policy, heck, for anyone who interacts with other people, and that should be all of us. Mr. Epley is a genial, informative host in this tour of some of the most interesting findings in the social psychology of understanding one another, which he calls "mind-reading." His examples are drawn from the headlines as well as the peer-reviewed literature, and he keeps things going at a quick pace without dumbing-down the science.” —David J. Levitin, The Wall Street Journal

“Psychologist Nicholas Epley’s Mind-wise provides a guide to understanding the minds of others. His engrossing book outlines the strategies that we use: projecting from our own minds, using stereotypes, and inferring from others’ actions.…Epley is a lucid and magnetic host, and his book...is crammed with evidence-based research.” —Leyla Sanai, The Independent

“Since Malcolm Gladwell’s Tipping Point and Freakonomics there has been a vast output of books on behavioural science. Many have been quite poor—formulaic books supporting obvious conclusions at unnecessary length. Mindwise stands out from the crowd. It is surprising, intelligent, and convincing. It continues to make worthwhile points in every chapter (after about chapter two most books of this kind are repeating themselves) and the author tells you things you don't know without straining for effect. You emerge from reading it understanding both yourself and others better, which is not a bad dividend from reading fewer than 200 pages.” —Daniel Finkelstein, The Times

“What to expect of a book with such a title? In this neuroscience-obsessed age, the best guess would be an enthusiastic account, illuminated with dramatic, if misleading, colour images of the brain regions that light up when people placed inside an MRI scanner are asked to think about their social relations. Or, by contrast, philosophical reflections on free will, the intentional stance and theories of mind. Refreshingly, however, Mindwise is free of such neuro- or philosophical ruminations; it takes for granted that we and our fellow humans have minds, and can exercise free will. Nicholas Epley, a professor of behavioural science at the Chicago Booth business school, by and large takes the internal workings of our brains for granted, and focuses instead on the common – and sometimes uncommon – sense of how we understand our own thoughts and actions, and, above all, read the thoughts and intentions of others.” —Steven Rose, The Guardian

“This is a fascinating exploration of what scientists have learned about our ability to understand the most complicated puzzle on the planet—other people—and the surprising mistakes we so routinely make.” —Podacademy.org

“Immensely readable….not only clear but enjoyable as well….a fascinating look at how people understand one another, the obstacles to that understanding, and the ways in which they can hone their natural mind-reading ability. Though it may not be the kind of mind-reading found in science fiction, Mindwise gives readers the tools to get one step closer to better grasping the minds around them.” —Amanda Wicks, Washington Independent Review of Books

“Epley’s account suggests that unless you genuinely value the perspective of others, and not just those that conform to your own, you are not going to understand them. Really effective smart thinking is not, therefore, just a means to an end: it has to be rooted in what we see as ends in themselves, the values by which we live.” —Julian Baggini, Financial Times

“One of the smartest and most entertaining books I have read in years.  At a time when there are dozens of popular social science books to choose from, Epley's masterpiece stands out as the cream of the crop.” —Steven D. Levitt, coauthor of Freakonomics

“Mindwise is a brilliant and beautiful exploration of the mystery of other minds—and how we fail to solve it. Insightful and important, Mindwise is one of the best books of this or any other decade.” —Daniel Gilbert, New York Times bestselling author of Stumbling on Happiness

“What is it like to be someone else? How can we get into other people’s heads? These questions have challenged the greatest thinkers in Western philosophy, and they obsess every one of us as we try to deal with our family, lovers, friends, enemies, colleagues, and allies. In Mindwise, the distinguished social psychologist Nicholas Epley offers a lively and fascinating tour of the latest science on how we figure out (and all too often fail to figure out) what everyone else is thinking.” —Steven Pinker, Johnstone Professor of Psychology, Harvard University, and author of How the Mind Works and The Stuff of Thought

“‘Know thyself,’ commanded the Oracle at Delphi. Mindwise shows us why that’s so hard to do, yet so vital as the starting point for understanding others. Epley writes with scientific authority, grace, and deep humanity. You’ll come away from this book understanding the African concept of Ubuntu: A person is a person through other people.” —Jonathan Haidt, NYU Stern School of Business, author of The Righteous Mind

“Why are we often so terribly bad at figuring out what other people are thinking? Nicholas Epley is one of the smartest and most creative social psychologists alive, and in his extraordinary new book, he explores the powers and the limits of our capacity for ‘mindreading.’ Epley is a clear and engaging writer, and Mindwise is replete with fascinating insights into human nature.” —Paul Bloom, Brooks and Suzanne Ragen Professor of Psychology, Yale University, author of Just Babies

“Too much of life's misery comes from misunderstanding what others are thinking, and from assuming that those we love must know what is (obviously!) on our mind. Mindwise is a highly enjoyable and informative book by one of psychology's rising stars that will make you spend less time in pointless arguments and more time in rewarding relationships. Gaining some wisdom about the minds of others will be painless and priceless.” —Richard H. Thaler, Ralph and Dorothy Keller Distinguished Service Professor of Economics and Behavioral Science, Booth School of Business, University of Chicago

“Epley delivers the good news that we all have a sixth sense, an ability to read minds. The bad news is that we are not very good at it…Epley draws on a wealth of empirical social psychological research to help make sense of how humans understand and misunderstand one another.” Science (2014 Summer Reading Selection)