How It Was for Me: Stories (Paperback) 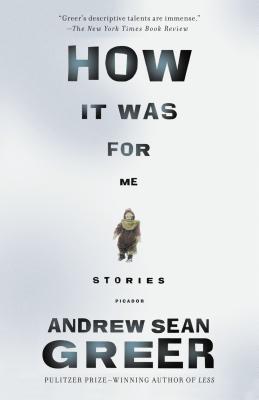 On Our Shelves Now
(This book cannot be returned to our store.)

In the title story of this collection, neighborhood boys crouch in a backyard toolshed, and conspire to prove their piano teachers to be witches. In "Cannibal Kings," a disillusioned young man accompanies a troubled boy on a tour of prep schools through the Pacific Northwest, only to realize that he has lost his way in life. And in "Come Live With Me And Be My Love," a middle-aged gentleman looks back at his mannered early life as a Ivy Leaguer, married to a vivacious woman but silently yearning for his best friend -- and the sacrifices that each made to uphold their compromising bargain.

With a classic storyteller's gift for nuance and understanding, and a poet's grace for language, Andrew Sean Greer makes a remarkable debut with How It Was For Me.

Andrew Sean Greer is the bestselling author of five works of fiction, including The Confessions of Max Tivoli, which was named a Best Book of the Year by both the San Francisco Chronicle and the Chicago Tribune. He is the recipient of the Northern California Book Award, the California Book Award, the New York Public Library Young Lions Award, the O Henry Award for Short Fiction, and fellowships from the National Endowment for the Arts and the New York Public Library. Greer lives in San Francisco.

“Wry and rueful.... Quirky and languorous, [Greer's] style beautifully captures his characters' wistful self-consciousness.... His stories are humane and hopeful in ways that are too rare.” —John Perry, The San Francisco Chronicle Book Review

“[An] impressive debut...There are very few flubbed lines in Greer's stark, delicate opererttas, which are as clever as they are gravely real.” —Mark Rozzo, Los Angeles Times

“Impressive...Greer's descriptive talents are immense.... While these stories are thick with melancholy, their frankness is refressing.” —The New York Times Book Review