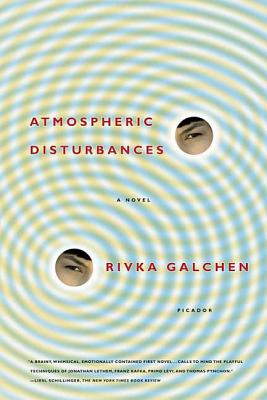 “Dr. Leo Liebenstein has some problems: his delusional patient is missing, his wife has been replaced by a simulacrum and he has to start a new job controlling the weather down in Patagonia on Monday morning! Rivka Galchen's debut novel is hilarious, heartbreaking, and fully enthralling.”
— Alexis Akre, Olsson's Books & Records, Washington, DC

Rivka Galchen's Atmospheric Disturbances is a "witty, tender, and conceptually dazzling" (Booklist) novel about the mysterious nature of human relationships.

When Dr. Leo Liebenstein's wife disappears, she leaves behind a single confounding clue: a woman who looks, talks, and behaves exactly like her. A simulatcrum. But Leo is not fooled, and he knows better than to trust his senses in matters of the heart. Certain that the real Rema is alive and in hiding, he embarks on a quixotic journey to reclaim her. With the help of his psychiatric patient Harvey--who believes himself to be a secret agent able to control the weather--his investigation leads him from the streets of New York City to the southernmost reaches of Patagonia, in search of the woman he loves.

Rivka Galchen received her MD from the Mount Sinai School of Medicine, having spent a year in South America working on public health issues. Galchen completed her MFA at Columbia University, where she was a Robert Bingham Fellow. Her essay on the Many Worlds Interpretation of quantum mechanics was published in The Believer, and she is the recipient of a 2006 Rona Jaffe Foundation Writers’ Award. Galchen lives in New York City. She is the author of the novel Atmospheric Disturbances.

“A relentless exploration of how a man could fail to see clearly the woman he loves . . . [A novel] that knows how to move from the comic to the painful . . . Galchen has a knack for taking a thread and fraying it, so that a sentence never quite ends up where you expect.” —James Wood, The New Yorker

“At once mournful and playful . . . [a] droll, exquisite first novel.” —Laura Miller, Salon.com

“There are passages so achingly beautiful in Galchen's strange puzzle of a book--about love, resilience, and perception.” —Jennifer Reese, Entertainment Weekly (Grade A)

“Galchen's dark and comical mystery is a clever take on the ways love, longing and overanalysis can drive you absolutely nuts.” —Marie Claire

“Genuinely suspenseful . . . Ms. Galchen is a writer to be watched.” —The Economist