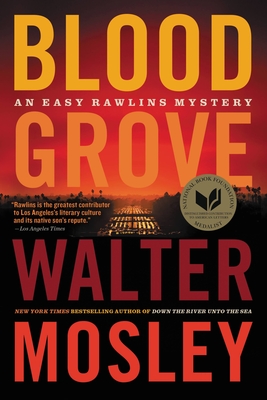 This is book number 15 in the Easy Rawlins series.

"Master of craft and narrative" Walter Mosley returns with this crowning achievement in the Easy Rawlins saga, in which the iconic detective's loyalties are tested on the sun-soaked streets of Southern California (National Book Foundation)

It is 1969, and flames can be seen on the horizon, protest wafts like smoke though the thick air, and Easy Rawlins, the Black private detective whose small agency finally has its own office, gets a visit from a white Vietnam veteran. The young man comes to Easy with a story that makes little sense. He and his lover, a beautiful young woman, were attacked in a citrus grove at the city’s outskirts. He may have killed a man, and the woman and his dog are now missing. Inclined to turn down what sounds like nothing but trouble, Easy takes the case when he realizes how damaged the young vet is from his war experiences—the bond between veterans superseding all other considerations.

The veteran is not Easy’s only unlooked-for trouble. Easy’s adopted daughter Feather’s white uncle shows up uninvited, raising questions and unsettling the life Easy has long forged for the now young woman. Where Feather sees a family reunion, Easy suspects something else, something that will break his heart.

Blood Grove is a crackling, moody, and thrilling race through a California of hippies and tycoons, radicals and sociopaths, cops and grifters, both men and women. Easy will need the help of his friends—from the genius Jackson Blue to the dangerous Mouse Alexander, Fearless Jones, and Christmas Black—to make sense of a case that reveals the darkest impulses humans harbor.

Blood Grove is a novel of vast scope and intimate insight, and a soulful call for justice by any means necessary.

Walter Mosley is one of America's most celebrated and beloved writers. A Grand Master of the Mystery Writers of America, he has won numerous awards, including the Anisfield-Wolf Award, a Grammy, a PEN USA's Lifetime Achievement Award, and several NAACP Image Awards. His books have been translated into more than twenty languages.

Winner of the Lifetime Achievement Award!

“Mosley is a master of craft and narrative, and through his incredibly vibrant and diverse body of work, our literary heritage has truly been enriched...From mysteries to literary fiction to nonfiction, Mosley’s talent and memorable characters have captivated readers everywhere, and the Foundation is proud to honor such an illustrious voice whose work will be enjoyed for years to come... what sets his work apart is his examination of both complex issues and intimate realities through the lens of characters in his fiction, as well as his accomplished historical narrative works and essays.”

“Lest one think Mr. Mosley’s middle-age hero—sensitive and contemplative though he may be—is not still up to whatever challenge may confront him, he warns: ‘Easy is my name, not my nature.’”—Tom Nolan, Wall Street Journal

“The ability to simultaneously keep us readers in confusion and in thrall marks Mosley — winner of the National Book Foundation’s 2020 Medal for Distinguished Contribution to American Letters — as a mystery master….The central mystery in Blood Grove — as in all the Easy Rawlins books — is as much about the brazen contradictions of American society as it is about what happened in that orange grove one night. But that mystery turns out to be pretty gripping too.”
—Maureen Corrigan, Washington Post

"Mosley’s inimitable rat-a-tat prose style is in full force here, and he keeps his passionate commitment to social issues right up front. A worthy addition to a nonpareil series."

“In the 15th outing for his iconic private detective, Easy Rawlins, Mosley once again chronicles a part of America rendered invisible — and overpowered — by whiteness. The book is set in 1969, with Rawlins on the verge of 50, still struggling with professional and romantic and familial conflicts in a Los Angeles about to be beset by the berserk.”
—The New York Times Book Review, Editor's Choice

"Walter Mosley’s books about Easy Rawlins are crime fiction, not history. But taken together, they’re a vivid picture of Black life in Los Angeles in the mid-20th century....Easy Rawlins takes a long strange trip in Blood Grove, and it’s a thrill to take it with him."
—Colette Bancroft, Tampa Bay Times

"Mosley effortlessly moves the series to 1969 in Blood Grove, showing just how far Easy has come....A solid mystery, Blood Grove will show long-time readers just how much they have missed Easy."

"If Walter Mosely’s Blood Grove is your first Easy Rawlins’ book, by the time you finish you’ll rejoice that you have 14 more to catch up on. If you’re already an aficionado, Mosley’s latest detective creation is the life diversion you know you need now.... [Easy] is smart, self-possessed and, with Mosley’s ear for dialogue, unabashedly funny. Blood Grove is ripe to be plucked as one of Mosley’s finest and most important novels.

"Get Blood Grove, and you might as well just put that bookmark in a drawer....For fans, Mosley goes the extra step, offering a chance to catch up with the dark characters that Rawlins has called “friends” in past novels. If you’re not a fan, grab this book and you will be quick. Just don’t grab it after dark: Blood Grove will keep your eyes open all night."

"If Walter Mosely’s Blood Grove is your first Easy Rawlins’ book, by the time you finish you’ll rejoice that you have 14 more to catch up on. If you’re already an aficionado, Mosley’s latest detective creation is the life diversion you know you need now....Blood Grove is ripe to be plucked as one of Mosley’s finest and most important novels."

“Mosley’s authorial superpower remains his razor-sharp perception…. This novel is more than a simple mystery meant for entertainment; it and its serial predecessors advocate for the Black hero in literature and in life. … a strong entry in a robust series and an even stronger entry into the genre that further solidifies Rawlins as an enduring figure, one who has survived and thrived in a world that sees him as less than the hero he is.”
—Aaron Coats, Chicago Review of Books

"What’s perhaps most remarkable about Blood Grove—as with all Easy Rawlins novels—is Mosley’s undiminished gift for embedding the poignant messaging of the protest novel in hard-boiled crime fiction without ever sacrificing punch or pace....Blood Grove does its many antecedents proud—not least among them, Easy Rawlins’ formidable first 14."

"Both Chandler and Mosley amply reward readers with the beauty of their prose and with the world views of their iconic heroes, men of honor struggling to do right in an unjust world....For Easy Rawlins, it has meant trying to do the same with the added complication of being a Back man in race-torn, post-World War II Los Angeles.”

“Mosley has his finger on the pulse of racial and cultural issues of the late ‘60s, and the book is sure to make readers ponder just how much has and hasn't changed today.”—Christina Ianzito, AARP

"It is a fair bet that if Walter Mosley has a book coming out during any given month, there’s an excellent chance it will be the best mystery of that month. Case in point: his latest. Nothing is quite what it seems in this place, in this time, in this book....I read it all in one sitting, as I just could not stop turning the pages.”
—Bruce Tierney, BookPage

"Mosley’s latest, Blood Grove, may just be one of the best novels in an already iconic detective series....Mosley manages to unfurl a genuinely captivating plot that travels a dark odyssey through the subcultures of 1969 LA, while also adding poignant new depth to the stories of long-running characters. Blood Grove is as satisfying as noir gets."

“Mosley does a fine job highlighting a world of Black survivors who know how difficult their struggle remains, every day of every decade. This marvelous series is as relevant as ever.”
—Publishers Weekly

“Easy's finely calibrated understanding of and commentary on the social and racial climate around him gives the novel its defining texture and power… A new Easy Rawlins novel is always big news in crime-fiction circles, and this fifteenth entry in the series does not disappoint.”
—Booklist

Praise for TROUBLE IS WHAT I DO