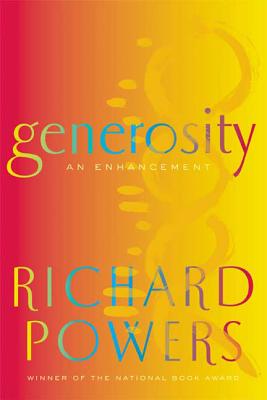 “From laugh-out-loud whimsy to reeling philosophical depth, Generosity tells the story of an unusually contented young woman and the people who wish to possess her, or at least her DNA, to create the world's first happiness gene. I read this stunning book with such rapt attention and awe that when I finished it I wanted to start again. Generosity is both exquisitely timely and for the ages.”
— Sheryl Cotleur, Book Passage, Corte Madera, CA

FROM THE NATIONAL BOOK AWARD WINNING AUTHOR OF "THE ECHO MAKER," A PLAYFUL AND PROVOCATIVE NOVEL ABOUT THE DISCOVERY OF THE HAPPINESS GENE

When Chicagoan Russell Stone finds himself teaching a Creative Nonfiction class, he encounters a young Algerian woman with a disturbingly luminous presence. Thassadit Amzwar's blissful exuberance both entrances and puzzles the melancholic Russell. How can this refugee from perpetual terror be so happy? Won't someone so open and alive come to serious harm? Wondering how to protect her, Russell researches her war-torn country and skims through popular happiness manuals. Might her condition be hyperthymia? Hypomania? Russell's amateur inquiries lead him to college counselor Candace Weld, who also falls under Thassa's spell. Dubbed Miss Generosity by her classmates, Thassa's joyful personality comes to the attention of the notorious geneticist and advocate for genomic enhancement, Thomas Kurton, whose research leads him to announce the genotype for happiness.

Russell and Candace, now lovers, fail to protect Thassa from the growing media circus. Thassa's congenital optimism is soon severely tested. Devoured by the public as a living prophecy, her genetic secret will transform both Russell and Kurton, as well as the country at large.

What will happen to life when science identifies the genetic basis of happiness? Who will own the patent? Do we dare revise our own temperaments? Funny, fast, and finally magical, "Generosity "celebrates both science and the freed imagination. In his most exuberant book yet, Richard Powers asks us to consider the big questions facing humankind as we begin to rewrite our own existence.

Richard Powers is the author of nine novels. The Echo Maker (FSG, 2006) won the National Book Award and was a finalist for the Pulitzer Prize. Powers has received a MacArthur Fellowship, a Lannan Literary Award, and the James Fenimore Cooper Prize for Historical Fiction. He lives in Illinois.

"An excellent introduction to Powers's work, a lighter, leaner treatment of his favorite themes and techniques . . . An engaging story-teller . . . even as he questions the conventions of narrative and character, Generosity gains in momentum and suspense."—Jay McInerney, The New York Times Book Review

"Powers is a brilliantly imaginative writer, working here with a lightness of touch, a crisp sense of peace, and a distinct warmth. . . . Powers shows both his reach as a student of humanity and his mastery as a storyteller."—O, The Oprah Magazine

"When written by Dostoevsky, Dickens, or Richard Powers at his best, one may feel that [the novel] can contain every facet of the world."—Michael Dirda, The New York Review of Books