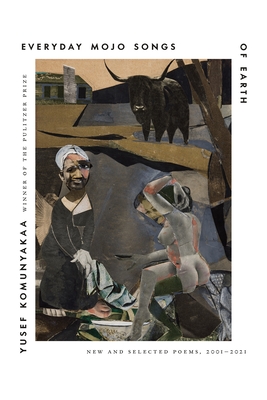 New and selected poems from the Pulitzer Prize–winning poet

Everyday Mojo Songs of Earth brings together selected poems from the past twenty years of Yusef Komunyakaa’s work, as well as new poems from the Pulitzer Prize winner. Komunyakaa’s masterful, concise verse conjures arresting images of peace and war, the natural power of the earth and of love, his childhood in the American South and his service in Vietnam, the ugly violence of racism in America, and the meaning of power and morality.

The new poems in this collection add a new refrain to the jazz-inflected rhythms of one of our “most significant and individual voices” (David Wojahn, Poetry). Komunyakaa writes of a young man fashioning a slingshot, workers who “honor the Earth by opening shine / inside the soil,” and the sounds of a saxophone filling a dim lounge in New Jersey. As April Bernard wrote in The New York Times Book Review, “He refuses to be trivial; and he even dares beauty.”

Yusef Komunyakaa’s books of poems include Warhorses (FSG, 2008), Taboo (FSG, 2004), and Neon Vernacular: New and Selected Poems, for which he received the Pulitzer Prize. He teaches at New York University.

“A monumental collection . . . No matter how well you know Komunyakaa’s poetry, you’ll find this collection an illuminating retrospective, and if you’re new to him, this is the place to start.” —Ron Charles, The Washington Post

"This dazzling collection makes a definitive case for the Pulitzer Prize–winning Komunyakaa as a monumental and singular American voice. A jazzy master of enjambment and arresting opening lines, Komunyakaa synthesizes natural history, myth, and wide-ranging intellectual curiosity into sensory acts of witness . . . In this roving survey of history and nature, violence often meets beauty, but Komunyakaa never forgets how ‘The body remembers / every wish one lives for or doesn’t.’” —Publishers Weekly (Starred review)

“Twenty years of new and previously published poems combine to create an impressive new volume by Pulitzer Prize-winner Komunyakaa. The new work ushers the reader into the rhythmic meditations on topics that include racial violence, memory, and the duality of moments that are both ephemeral and timeless . . . These new works are followed by a solid representation of the last two decades of the poet’s rich oeuvre, replete with his signature, striking, unexpected imagery and lyricism. Komunyakaa’s gift for beautifully revealing the godly alongside the earthly, the realistic alongside the surreal, is superbly showcased in this well-curated and essential collection.” —Booklist (Starred review)

"Yusef Komunyakaa’s poems reveal a unique understanding of the landscape of morality and justice in America; this collection brings together some of his most essential from the last two decades, a gift for both fans and newcomers alike. The result is a well-deserved testament to the power and weight of his work.” —Lit Hub

"The Pulitzer Prize winner Yusef Komunyakaa again demonstrates why he is a giant of American poetry . . . Everyday Mojo Songs of Earth demonstrates Komunyakaa’s skill in using words to paint scenes not only with great emotional insight but a researched and understated worldliness as well, threading connections originally unseen and piecing together verses that come alive whether they are read silently alone or recited aloud in front of a crowd." —Avenue

"Komunyakaa is already a legendary figure in American poetry, beloved for his subtle ear and unflinching confrontations with the traumas of the past and present. This late-career retrospective finds the poet, now in his 70s, recalling the past with a new urgency, savoring the present, and preparing as well as he can for what comes next." —Craig Morgan Teicher, NPR