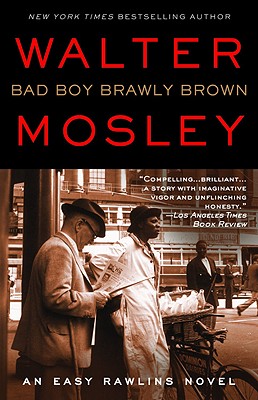 This is book number 7 in the Easy Rawlins series.

Young Brawly Brown has traded in his family for The Clan of the First Men, a group rejecting white leadership and laws. Brown's mom asks Easy to make sure her baby's okay, and Easy promises to find him. His first day on the case, Easy comes face-to-face with a corpse, and before he knows it he is a murder suspect and in the middle of a police raid. Brawly Brown is clearly the kind of trouble most folks try to avoid. It takes everything Easy has just to stay alive as he explores a world filled with betrayals and predators like he never imagined.
Walter Mosley is one of America's most celebrated and beloved writers. A Grand Master of the Mystery Writers of America, he has won numerous awards, including the Anisfield-Wolf Award, a Grammy, a PEN USA's Lifetime Achievement Award, and several NAACP Image Awards. His books have been translated into more than twenty languages. His short fiction has appeared in a wide array of publications, including The New Yorker, GQ, Esquire, Los Angeles Times Magazine, and Playboy, and his nonfiction has been published in The New York Times Book Review, The New York Times Magazine, Newsweek, and The Nation. He is the author of Down the River unto the Sea. He lives in New York City.