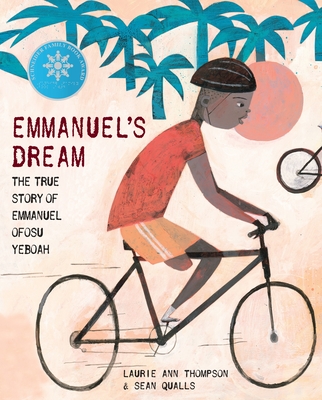 Born in Ghana, West Africa, with one deformed leg, he was dismissed by most people—but not by his mother, who taught him to reach for his dreams. As a boy, Emmanuel hopped to school more than two miles each way, learned to play soccer, left home at age thirteen to provide for his family, and, eventually, became a cyclist. He rode an astonishing four hundred miles across Ghana in 2001, spreading his powerful message: disability is not inability. Today, Emmanuel continues to work on behalf of the disabled.

Includes an author's note with more information about Emmanuel's charity.
Laurie Ann Thompson is the author of Be a Changemaker: How to Start Something That Matters, a how-to guide for teens who want to change the world. An advocate for social justice, Laurie is dedicated to inspiring and empowering young readers. Emmanuel's Dream is her picture-book debut. Visit her at lauriethompson.com.

Sean Qualls has illustrated many highly acclaimed children's books, including Giant Steps to Change the World by Spike Lee and Tonya Lewis Lee, Lullaby by Langston Hughes, and Before John Was a Jazz Giant by Carole Boston Weatherford, which was named a Coretta Scott King Illustrator Honor Book. Sean also created the art for Dizzy by Jonah Winter, which received five starred reviews, and Freedom Song by Sally M. Walker. Learn more at seanqualls.com.