The Handmaid's Tale and The Testaments Box Set (Boxed Set) 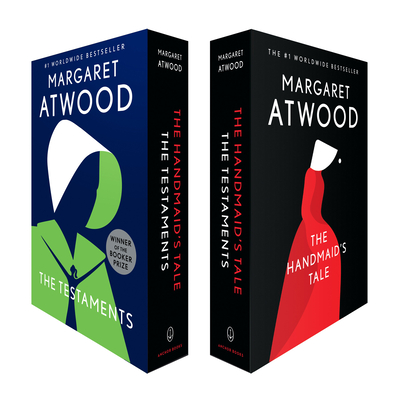 The Handmaid's Tale and The Testaments Box Set (Boxed Set)


Usually Ships in 1-5 Days
A box set of Margaret Atwood's bestselling companioned novels, The Handmaid's Tale and The Testaments

In The Handmaid's Tale, environmental disasters and declining birthrates have led to a Second American Civil War and the rise of the Republic of Gilead, a totalitarian regime that enforces rigid social roles and enslaves the few remaining fertile women. Offred is one of these, a Handmaid bound to produce children for one of Gilead's Commanders. Deprived of her husband, her child, her freedom, and even her own name, Offred clings to her memories and her will to survive.

In The Testaments, set more than fifteen years after the events of The Handmaid's Tale, The Republic of Gilead maintains its repressive grip on power, but it is beginning to rot from within. At this crucial moment, the lives of three radically different women come together, with potentially explosive results.

This beautifully designed box set will make the perfect gift.
Margaret Atwood, whose work has been published in more than forty-five countries, is the author of more than fifty books of fiction, poetry, critical essays, and graphic novels. In addition to The Handmaid's Tale, now an award-winning TV series, her novels include Cat's Eye, short-listed for the 1989 Booker Prize; Alias Grace, which won the Giller Prize in Canada and the Premio Mondello in Italy; The Blind Assassin, winner of the 2000 Booker Prize; Oryx and Crake, short-listed for the 2003 Man Booker Prize; The Year of the Flood; MaddAddam; and Hag-Seed. She is the recipient of numerous awards, including the Peace Prize of the German Book Trade, the Franz Kafka Prize, the PEN Center USA Lifetime Achievement Award, and the Los Angeles Times Innovator's Award. In 2019, she was made a member of the Order of the Companions of Honour for services to literature.