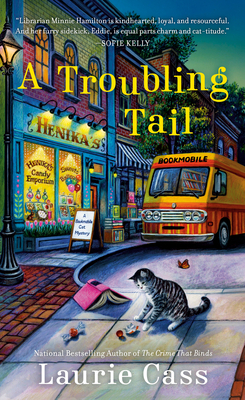 This is book number 11 in the A Bookmobile Cat Mystery series.

When the owner of a local candy store is murdered, librarian Minnie Hamilton and her rescue cat, Eddie, prepare to find the sweet spot to solve a crime.

The charming town of Chilson, Michigan is beautiful in the spring, and local librarian Minnie and her cat Eddie are delivering great reads far and wide on one of the first warm days of the year. But a chill sweeps through them when they discover that one of their favorite patrons, the local candy store owner, has been found murdered. Although Minnie can’t understand who could have a motive to murder such a kind man, she determines that the sticky problem isn’t hers to solve.

However, when rumors start flying around town and the police have no leads, Minnie decides to throw her investigative hat into the ring. The more Minnie investigates, the less certain she is that the victim’s past is as wholesome as his reputation. But Minnie has plenty of experience unearthing inconvenient truths, and she and Eddie won’t rest until they determine how the candy store owner met his bitter end.
Laurie Cass is the national bestselling author of the Bookmobile Cat Mystery series.