Absolute Zero And The Conquest Of Cold (Paperback) 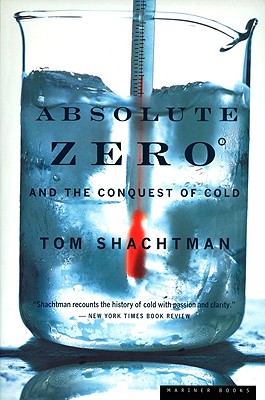 Absolute Zero And The Conquest Of Cold (Paperback)

In this engrossing scientific chronicle, a perennial paperback favorite, Tom Shachtman combines science, history, and adventure in the story of our four-centuries-long quest to master the secrets of cold. Now a documentary based largely on Shachtman’s acclaimed book promises to bring these exhilarating scientific accomplishments to a new audience. Underwritten by the National Science Foundation and the Alfred P. Sloan Foundation and set to air on PBS and the BBC, the documentary was produced by British Emmy Award winner David Dugan, in collaboration with Meredith Burch of Meridian Productions in Washington, D.C.

Absolute Zero and the Conquest of Cold demonstrates how temperature science produced astonishing scientific insights and applications that have revolutionized civilization. It also illustrates how scientific advancement, fueled by fortuitous discoveries and the determination of individuals, shapes our understanding of and relation to the world.

Tom Shachtman has written 25 books, including the acclaimed Around the Block and Skyscraper Dreams. He has also written documentary films and tapes, which have won many awards. He lives with his wife in New York City.

"Tom Shachtman's done to ABSOLUTE ZERO AND THE CONQUEST OF COLD what Dava Sobel did to LONGITUDE."--Jerry E. Bishop, former science editor, THE WALL STREET JOURNAL

"Just plain fascinating ... tells in extraordinary detail the history of the search for absolute zero--which, amazingly, involves everyone from Galileo to Einstein!" -- Bradford Washburn, founding director, Boston's Museum of Science, and recipient, Centennial Award of the National Geographic Society

"It's a lovely, fascinating book, which brings science to life." -- Alan Lightman, author of GOOD BENITO and EINSTEIN'S DREAMS —