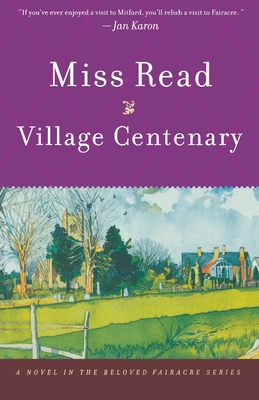 VILLAGE CENTENARY welcomes us back to Miss Read's cozy downland village just in time for the one hundredth anniversary of Fairacre School. Miss Clare, who was a pupil and later a teacher there, points out that such a centenary should be celebrated, and all of Fairacre is quick to offer suggestions -- from a tea party to a full-scale pageant. Deciding how best to stage the grand occasion, however, is only one of Miss Read's problems. The ancient skylight in the school is leaking, and Mr. Willetts fears that replacing it will be a difficult job. The new teacher, Miss Briggs, fresh from college and full of idealistic theories, proves a thorn in Miss Read's side. The vicar has decided to keep bees. Miriam Quinn is afraid she might have to leave home. And Mrs. Pringle is her usual dour self. But the seasons continue to change, and the centenary year unfolds with its hopes and fears, its memories and forecasts, its friendships and feuds. VILLAGE CENTENARY marks yet another delightful year in the company of our favorite Fairacre friends.

"If you've ever enjoyed a visit to Mitford, you'll relish a visit to Fairacre." -- Jan Karon —