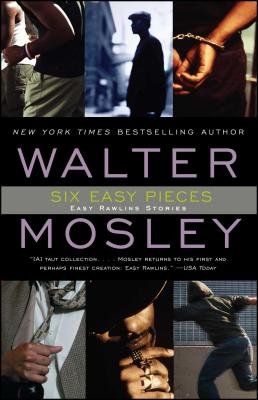 This is book number 8 in the Easy Rawlins Mystery series.

A collection of seven stories from bestselling and award-winning mystery writer Walter Mosley come together in a single trade paperback volume.

Now from the bestselling and award-winning writer comes Six Easy Pieces. The beloved Ezekiel Rawlins now has a steady job as senior head custodian of Sojourner Truth High School, a nice house with a garden, a loving woman, and children. He counts the blessings of leading a law-abiding life but is nowhere near happy. Easy mourns the loss of his best friend, Mouse. Though he tries to leave the street life behind, he still finds himself trading favors and investigating cases of arson, murder, and missing people. People who can't depend on the law to solve their problems, seek out Easy.

A bomb is set in the high school where Easy works. A man's daughter runs off with his employee. A beautiful woman turns up dead and the man who loved her is wrongly accused. Easy is the man people turn to in search of justice and retribution. He even becomes party to a killing that the police might call murder.
Walter Mosley is the acclaimed author of forty-three books, including the internationally bestselling Easy Rawlins series. His best known Easy Rawlins novels include Devil in a Blue Dress, A Red Death, White Butterfly, Black Betty, and Little Yellow Dog. He is also the author of the collection of stories Always Outnumbered. Always Outgunned featuring Socrates Fortlow, which was the basis for an HBO feature film. A former president of the Mystery Writers of America, he was named a grand master by the organization in 2016. He has served on the board of directors of the National Book Foundation and is a recipient of the PEN American Center Lifetime Achievement Award. A native of Los Angeles, he now lives in New York City.

"Mosley's a master. Expect some surprises in each story and in Easy's life, making Six Easy Pieces the perfect sum of its parts."
— The Plain Dealer (Cleveland)