My Work Is Not Yet Done (Paperback) 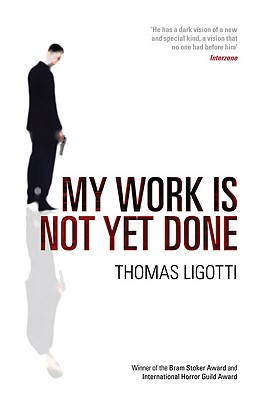 My Work Is Not Yet Done (Paperback)


Usually Ships in 1-5 Days
When junior manager Frank Dominio is suddenly demoted and then fired, it seems there was more than a grain of truth to his persecution fantasies. But as he prepares to even the score with those responsible for his demise, he unwittingly finds an ally in a dark and malevolent force that grants him supernatural powers. Frank takes his revenge in the most ghastly ways imaginable—but there will be a terrible price to pay once his work is done. This tale of corporate horror and demonic retribution will strike a chord with anyone who has ever been disgruntled at work.
Thomas Ligotti has won the Bram Stoker award and World Fantasy Award four times respectively for his unique horror fiction. His other books include Grimscribe, The Nightmare Factory, Nocturary, The Shadow at the Bottom of the World, and Teatro Grottesco. He lives in Florida.
"Ligotti has written another colorful collection of horror stories . . . which spring on the unsuspecting reader the combination of supernatural characters, natural props, and "weird" circumstances . . . snapshots of horror that demonstrate Ligotti's command of language and rich imagination. Starkly colored images keep the reader gasping."  —Library Journal on Noctuary

"If there were a literary genre called 'philosophical horror,' Thomas Ligotti's Grimscribe would easily fit within it . . . provocative images and a style that is both entertaining and lyrical."  —New York Times Book Review