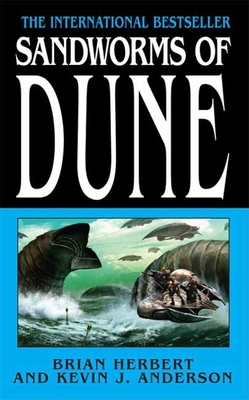 This is book number 5 in the Dune series.

At the end of Frank Herbert's final novel, Chapterhouse: Dune, a ship carrying a crew of refugees escapes into the uncharted galaxy, fleeing from a terrifying, mysterious Enemy. The fugitives used genetic technology to revive key figures from Dune's past--including Paul Muad'Dib and Lady Jessica--to use their special talents to meet the challenges thrown at them.

Based directly on Frank Herbert's final outline, which lay hidden in two safe-deposit boxes for a decade, Sandworms of Dune will answer the urgent questions Dune fans have been debating for two decades: the origin of the Honored Matres, the tantalizing future of the planet Arrakis, the final revelation of the Kwisatz Haderach, and the resolution to the war between Man and Machine.

This breathtaking new novel in Frank Herbert's Dune series has enough surprises and plot twists to please even the most demanding reader.

Brian Herbert, son of Frank Herbert, wrote the definitive biography of his father, Dreamer of Dune, which was a Hugo Award finalist. Brian is president of the company managing the legacy of Frank Herbert and is an executive producer of the motion picture Dune, as well as of the TV series Dune: The Sisterhood. He is the author or coauthor of more than forty-five books, including multiple New York Times bestsellers, has been nominated for the Nebula Award, and is always working on several projects at once. He and his wife, Jan, have traveled to all seven continents, and in 2019, they took a trip to Budapest to observe the filming of Dune.

Kevin J. Anderson has written dozens of national bestsellers and has been nominated for the Hugo Award, the Nebula Award, the Bram Stoker Award, and the SFX Readers' Choice Award. His critically acclaimed original novels include the ambitious space opera series The Saga of Seven Suns, including The Dark Between the Stars, as well as Wake the Dragon epic fantasy trilogy, the Terra Incognita fantasy epic with its two accompanying rock CDs. He also set the Guinness-certified world record for the largest single-author book signing, and was recently inducted into the Colorado Authors’ Hall of Fame.

“I know nothing comparable to it except The Lord of the Rings.” —Arthur C. Clarke on Dune

“Appealing and gripping…Fascinating detail, yet cloaked in mystery and mysticism.” —Milwaukee Journal on Heretics of Dune

“The vast and fascinating Dune saga sweeps on---as exciting and gripping as ever.” —Kirkus Reviews on Chapterhouse: Dune

“This compelling saga of men and women struggling for their freedom is required reading for Dune fans.” —Library Journal on Dune: The Butlerian Jihad

“Dune addicts will happily devour Herbert and Anderson's spicy conclusion to their second prequel trilogy.” —Publishers Weekly on Dune: The Battle of Corrin