A Lesson in Secrets (Compact Disc) 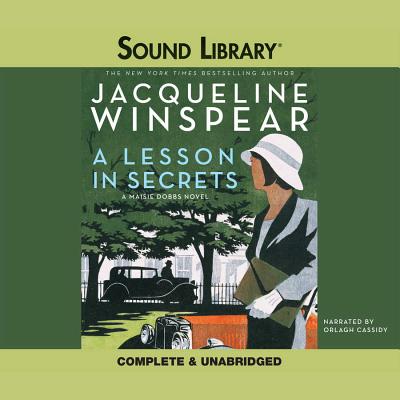 “Put on the kettle, lock all the doors, and settle in for a fabulous read with the newest adventure of the indomitable Maisie Dobbs! It's 1932, and Maisie takes a job with the British Secret Service, going undercover to investigate ties between a small Cambridge college and the rising Nazi Party. When the head of the college turns up dead, Maisie finds herself torn between the Service and Scotland Yard in a complicated case involving echoes of the last war and omens of the next. A Lesson in Secrets confirms Winspear's place at the top of the list of historical mystery writers.”
— Kristine Kaufman, The Snow Goose Bookstore, Stanwood, WA

Maisie Dobbs first assignment for the British Secret Service takes her undercover to Cambridge as a professor and leads to the investigation of a web of activities being conducted by the emerging Nazi Party.

In the summer of 1932, Maisie Dobbs career takes an exciting new turn when she accepts an undercover assignment directed by Scotland Yard's Special Branch and the Secret Service. Posing as a junior lecturer, she is sent to a private college in Cambridge to monitor any activities not in the interests of His Majesty's government.

When the college's controversial pacifist founder and principal, Greville Liddicote, is murdered, Maisie is directed to stand back as Detective Chief Superintendent Robert MacFarlane and Detective Chief Inspector Richard Stratton spearhead the investigation. She soon discovers, however, that the circumstances of Liddicote's death appear inextricably linked to the suspicious comings and goings of faculty and students under her surveillance.

To unravel this web, Maisie must overcome a reluctant Secret Service, discover shameful hidden truths about Britain's conduct during the Great War, and face off against the rising powers of the Nationalsozialistische Deutsche Arbeiterpartei the Nazi Party in Britain.