The Man Who Spoke Snakish (Paperback) 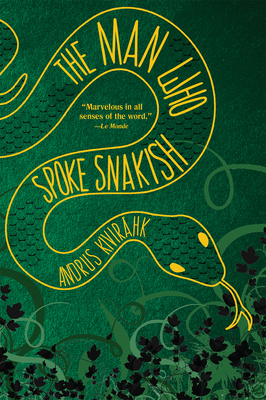 A bestseller in the author's native country of Estonia, where the book is so well known that a popular board game has been created based on it, The Man Who Spoke Snakish is the imaginative and moving story of a boy who is tasked with preserving ancient traditions in the face of modernity. Set in a fantastical version of medieval Estonia, The Man Who Spoke Snakish follows a young boy, Leemet, who lives with his hunter-gatherer family in the forest and is the last speaker of the ancient tongue of snakish, a language that allows its speakers to command all animals. But the forest is gradually emptying as more and more people leave to settle in villages, where they break their backs tilling the land to grow wheat for their "bread" (which Leemet has been told tastes horrible) and where they pray to a god very different from the spirits worshipped in the forest's sacred grove. With lothario bears who wordlessly seduce women, a giant louse with a penchant for swimming, a legendary flying frog, and a young charismatic viper named Ints, The Man Who Spoke Snakish is a totally inventive novel for readers of David Mitchell, Sj n, and Terry Pratchett.

Andrus Kivirahk is one of Estonia's most highly regarded contemporary writers. A journalist by profession, he is known for his satirical newspaper columns and his bestselling novels. A popular board game has been created on the basis of his novel "The Man Who Spoke Snakish," which is his first book ever to appear in English. He lives in Tallinn, Estonia.

Christopher Moseley is a translator of Estonian and Latvian. He teaches at University College London and is Treasurer of the Foundation for Endangered Languages.