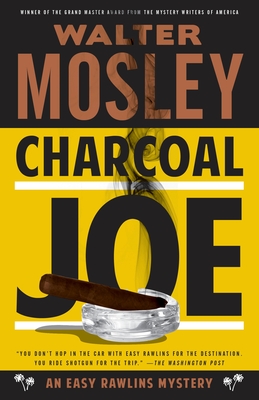 
Usually Ships in 1-5 Days
In this latest installment of the Easy Rawlins series from beloved and bestselling author Walter Mosley, the L.A. private eye has his hands full with the investigation of a racially charged murder.

Easy Rawlins has started a new detective agency with two trusted partners and has a diamond ring in his pocket for his longtime girlfriend Bonnie Shay. Finally, Easy's life seems to be heading towards something that looks like normalcy, but, inevitably, a case gets in the way. Easy's friend Mouse calls in a favor—he wants Easy to meet with Rufus Tyler, an aging convict whom everyone calls Charcoal Joe. Joe's friend's son, Seymour, has been charged with the murder of two white men. Joe is convinced the young man is innocent and wants Easy to prove it no matter what the cost. But seeing as how Seymour was found standing over the dead bodies, and considering the racially charged nature of the crime, that will surely prove to be a tall order.
Walter Mosley is the author of fifty books, most notably fourteen Easy Rawlins mysteries, the first of which, Devil in a Blue Dress, was made into an acclaimed film starring Denzel Washington. Always Outnumbered, adapted from his first Socrates Fortlow novel, was an HBO film starring Laurence Fishburne. Mosley is the winner of numerous awards, including an O. Henry Award, a Grammy Award, and PEN America’s Lifetime Achievement Award. He has just been named the 2016 Grand Master by the Mystery Writers of America. A Los Angeles native and a graduate of Goddard College, he holds an MFA from the City College of New York and now lives in Brooklyn.

“You don’t hop in the car with Easy Rawlins for the destination. You ride shotgun for the trip.” —The Washington Post

“Incomparable. . . . Easy quickly finds himself in a mess. . . . But as ever, [he] finds a way to rise above such circumstances”
— Chicago Tribune

“Much like Raymond Chandler did in his portrait of Southern California for his fictional private eye Philip Marlowe, or Dashiell Hammett did with Sam Spade, Mr. Mosley takes readers into the worlds of everyone from psychopathic criminals to business magnates, along with the minor players such as con men, tipsters, career criminals and cops.” —Pittsburgh Post Gazette