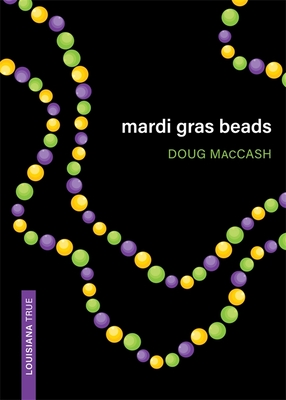 Beads are one of the great New Orleans symbols, as much a signifier of the city as a pot of scarlet crawfish or a jazzman's trumpet. They are Louisiana's version of the Hawaiian lei, strung around tourists' and conventioneers' necks to demonstrate enthusiasm for the city. The first in a new LSU Press series exploring facets of Louisiana's iconic culture, Mardi Gras Beads delves into the history of this celebrated New Orleans artifact, explaining how Mardi Gras beads came to be in the first place and how they grew to have such an outsize presence in New Orleans celebrations.

Beads are a big business based on valuelessness. Approximately 130 shipping containers, each filled with 40,000 pounds of Chinese-made beads and other baubles, arrive at New Orleans's biggest Mardi Gras throw importer each Carnival season. Beads are an unnatural part of the natural landscape, persistently dangling from the trees along parade routes like Spanish moss. They clutter the doorknobs of the city, sway behind its rearview mirrors, test the load-bearing strength of its attic rafters, and clog its all-important rainwater removal system. Mardi Gras Beads traces the history of these parade trinkets from their origins before World War One through their ascent to the premier parade catchable by the Depression era. Veteran Mardi Gras reporter Doug MacCash explores the manufacture of Mardi Gras beads in places as far-flung as the Sudetenland, India, and Japan, and traces the shift away from glass beads to the modern, disposable plastic versions. Mardi Gras Beads concludes in the era of coronavirus, when parades (and therefore bead throwing) were temporarily suspended because of health concerns, and considers the future of biodegradable Mardi Gras beads in a city ever more threatened by the specter of climate change.
Doug MacCash covers New Orleans art and culture for NOLA.com The Times- Picayune The New Orleans Advocate.