Macunaíma: The Hero with No Character (Paperback) 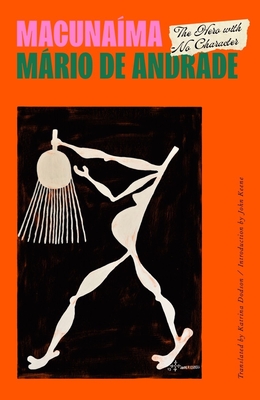 Macunaíma: The Hero with No Character (Paperback)

Here at last is an exciting new translation of the modernist Brazilian epic Macunaíma by Mário de Andrade. This landmark novel from 1928 has been hugely influential. It follows the adventures of the shapeshifting Macunaíma and his brothers as they leave their home in the northern Amazon for a whirlwind tour of Brazil, cramming four centuries and a continental expanse into a single mythic plane. Having lost a magic amulet, the hero and his brothers journey to Sao Paulo to retrieve the talisman that has fallen into the hands of an Italo-Peruvian captain of industry (who is also a cannibal giant). Written over six delirious days—the fruit of years of study—Macunaíma magically synthesizes dialect, folklore, anthropology, mythology, flora, fauna, and pop culture to examine Brazilian identity. This brilliant translation by Katrina Dodson has been many years in the making and includes an extensive section of notes providing essential background information for this magnificent work.

Mário de Andrade (1893–1945) was a poet, novelist, critic, piano teacher, ethnomusicologist, and leading figure in Brazilian culture. He was a central instiga­tor of the 1922 Semana de Arte Moderna (Modern Art Week), which marked a new era of modernism. He spent much of his life pioneering the study and preservation of Brazilian folk heritage and was the founding director of Sao Paulo’s Department of Culture.

Katrina Dodson’s translation of the Complete Stories by Clarice Lispector was awarded the 2016 PEN Translation Prize, the Lewis Galantiere Award, and a Northern California Book Award. She holds a PhD in Comparative Literature from the University of California, Berkeley.
Macunaíma is a miracle. There’s nothing like it in all of literature. Katrina Dodson is a hero.

An explosion of language… The obvious comparison for English speakers would be Ulysses, as an encyclopedia of styles, of language forms.
— Fredric Jameson

We are so fortunate that Mário de Andrade’s rollicking Macunaíma is finally reappearing in English in Katrina Dodson’s dazzling translation.

Macunaíma is above all a vision of mythical Brazilian consciousness, a picaresque epic of birth, triumph, decline and death.

Mário wrote our Odyssey and, with a swing of his native club, created our classical hero and the national poetic idiom for the next fifty years.

He’s an anti-hero hero, questioning and contradictory. Macunaíma is an emblem of the marvelous, metamorphosed into the errant question mark of his one-legged constellation. An anti-normative hero who points to a future, eventually more open, world.
— Haroldo de Campos

An explosion of language… The obvious comparison for English speakers would be Ulysses, as an encyclopedia of styles, of language forms.

Macunaíma is a self-consciously nation-founding novel that reads like a thick broth of painful historical truth, quoted myth, and irreducible pleasures. Rarely is so much pleasure given and pain revealed by overlapping languages.

A deliberately provocative text, slangy, comical, antiliterary, assuming all the apparent contradictions of the struggle against European seriousness in its various forms.
— Pascale Casanova