Rashomon and Other Stories (Paperback) 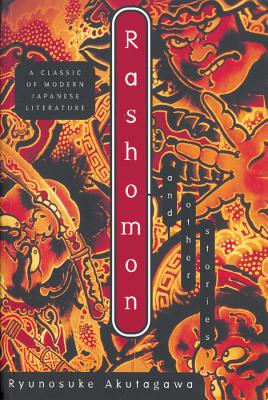 Rashomon and Other Stories (Paperback)

Writing at the beginning of the twentieth century, Ryunosuke Akutagawa created disturbing stories out of Japan's cultural upheaval. Whether his fictions are set centuries past or close to the present, Akutagawa was a modernist, writing in polished, superbly nuanced prose subtly exposing human needs and flaws. "In a Grove," which was the basis for Kurosawa's classic film Rashomon, tells the chilling story of the killing of a samurai through the testimony of witnesses, including the spirit of the murdered man. The fable-like "Yam Gruel" is an account of desire and humiliation, but one in which the reader's sympathy is thoroughly unsettled. And in "The Martyr," a beloved orphan raised by Jesuit priests is exiled when he refuses to admit that he made a local girl pregnant. He regains their love and respect only at the price of his life. All six tales in the collection show Akutagawa as a master storyteller and an exciting voice of modern Japanese literature.

Ryunosuke Akutagawa (1892–1927) was one of the most famous Japanese writers of the last century and was the author of Rashomon and other works. The Akutagawa Prize is named in his honor.

Because I was a Japanese major in college, a very nice edition of a translation of Rashomon and Other Stories by Ryunosuke Akutagawa had been left for me at my bedside, to read while I was there and to take with me when I left. Thoughtful, I thought. And fitting. Even more fitting, that friend and I no longer speak, and I am sure we have very different versions as to why that is.