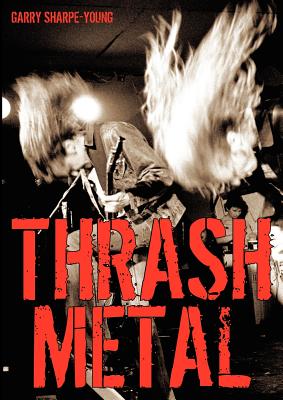 Thrash Metal. At first mocked by the Rock traditionalists Thrash would swamp the hard n' heavy world propelling one of it's own - Metallica, to the very pinnacle of Rock's elite. In the early 80s Thrash breathed new life into the Rock scene providing older acts with a much needed kick. This new force opened the floodgates to armies of teens armed with flying Vs, bullet belts and a sense of purpose that would fuel genres such as Thrashcore, Crossover and technical Speed Metal. Without Thrash there would be no Death Metal, no Black Metal. That explosion of aggression has seen subsequent afterblasts, most recently Europe and South America has seen a genuine renaissance of Thrash Metal. Without doubt, Thrash Metal still continues to make its mark in the biggest possible way. The 'big four' - Metallica, Megadeth, Anthrax and Slayer are all documented here in the greatest possible detail with full, up to the minute histories, exclusive photographs and global discographies, which include demos, albums, singles, chart positions, track listings and catalogue numbers. Over 400,000 words leave no stone left unturned in pursuit of knowledge of ex-members, rare recordings and career milestones. The author has interviewed all these major acts. Indeed, he interviewed Metallica's late Cliff Burton just days before his passing. The early days of Megadeth are straight from the mouth of Dave Mustaine. Also covered are the legion of groundbreaking Bay Area acts such as Metal Church, Testament, Exodus, Death Angel and Hirax. The European Thrash explosion of Kreator, Rage, Destruction, Sodom, Grave Digger and Helloween is also covered in frightening detail. The Pagan Thrash of Sabbat, the avant garde eccentricity of Celtic Frost and the Funk Thrash of Morded - it's all here. The second wave of Thrash with major artists such as Sepultura, Pantera and Machine Head takes the genre right up to the new breed of Thrashers, now a truly world-wide phenomomen. All examined in depth. Having achieved its quarter of a century, Thrash Metal is not only alive, it is thriving. If you thought this rawest form of Heavy Metal was consigned to the past this book will deliver a rude awakening Read the book, buy the records and bang that head.