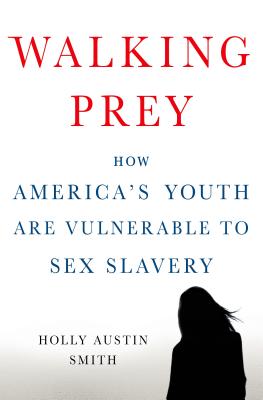 Today, two cultural forces are converging to make America's youth easy targets for sex traffickers. Younger and younger girls are engaging in adult sexual attitudes and practices, and the pressure to conform means thousands have little self-worth and are vulnerable to exploitation. At the same time, thanks to social media, texting, and chatting services, predators are able to ferret out their victims more easily than ever before. In Walking Prey, advocate and former victim Holly Austin Smith shows how middle class suburban communities are fast becoming the new epicenter of sex trafficking in America. Smith speaks from experience: Without consistent positive guidance or engagement, Holly was ripe for exploitation at age fourteen. A chance encounter with an older man led her to run away from home, and she soon found herself on the streets of Atlantic City. Her experience led her, two decades later, to become one of the foremost advocates for trafficking victims. Smith argues that these young women should be treated as victims by law enforcement, but that too often the criminal justice system lacks the resources and training to prevent the vicious cycle of prostitution. This is a clarion call to take a sharp look at one of the most striking human rights abuses, and one that is going on in our own backyard.

Holly Austin Smith is an advocate for human trafficking victims who speaks about her own experience nationwide. She is the author of Walking Prey. After becoming a victim of child sex trafficking at the age of 14, she nearly committed suicide while the man who abducted her served only one year in prison. Her story has been featured on the Dr. Oz show, as well as in the Associated Press, the Richmond Times Dispatch, the Tampa Bay Times, Cosmopolitan magazine, and Dallas Morning News. Smith writes a weekly column for the Washington Times Communities, and she has submitted testimony to Congress. She has consulted for the National Criminal Justice Training Center and AMBER Alert Training and Technical Assistance Program.  She is in constant demand as a speaker, speaking over 30 times in 2012 at universities, law enforcement agencies, and government-sponsored symposiums. She lives in Richmond, VA.

“Rarely does a book synthesize the complicated world of the sex industry with such insight and thoughtfulness. Told from a survivor's perspective, this book should be required reading for service providers, community members, and our young people.” —Lisa Goldblatt Grace, LICSW, MPH, Co-Founder & Director My Life My Choice

“Walking Prey sheds light on the shameful reality of child sexual exploitation and human trafficking within the United States. Holly Austin Smith's story helps to unravel the common mistruth that American youth are not vulnerable to human trafficking. Holly's courage and resilience is powerful, as are her thoughtful recommendations for law enforcement, government officials, and parents.” —Cindy McCain, Business Owner, Humanitarian, & Senior Advisor to the McCain Institute

“Both as a parent and as the leader of a national organization concerned with the child sexual trafficking plague, I am grateful for this book and I urge parents and policymakers to read it.” —Tim Winter, President, Parents Television Council

“In this thoroughly researched and profoundly moving account of sex trafficking in the United States, Holly Smith examines every statistic through a deeply considered reflection on her personal experience of being trafficked as a young teenager. By taking this courageous and generous approach she closes the gap between sensationalism and reality and opens the readers mind and heart past judgement and misconceptions to compassion and a desire to take action.” —Deborah Kampmeier, writer and director of Hounddog

“By candidly sharing her experience and her expertise, Holly Austin Smith helps professionals understand how they can help, not hurt, child sex trafficking victims. She thoughtfully teaches parents, educators and all of us what is within our power to do to prevent this horrendous crime.” —Melysa Sperber, Director, Alliance to End Slavery & Trafficking

“In Walking Prey, Holly exposes how the manipulative tactics of sex traffickers is made easier by the media; this revelation still makes my skin crawl. Something needs to be done so that our girls are not as easily lured by sex traffickers. Holly's story adds fuel to my fire to continue to educate girls about media literacy.” —Nicole Clark, Director of Cover Girl Culture

“Holly provides a vital voice to the anti-trafficking field and exposes the harsh realities of child sex trafficking in America. Her insight is courageous, thought provoking and timely. Anyone reading this book can use what they learn to become an active participant in ensuring a better future for our youth.” —Staca Shehan, National Center for Missing and Exploited Children

“Holly Smith's Walking Prey is a brave and moving book, but it's much more besides. It stands above the traditional narratives of slavery and emancipation, achieving that mix of personal truth and intellectual analysis that marks the work of a special few like Frederick Douglass. Her story is chilling, and a strong reminder of our nation's failure to protect its children. What makes "Walking Prey different is the deep and passionate, yet cool and logical, understanding of why and how our nation has failed, and what we should be doing about it. This is a book for everyone and one that is a must read for anyone hoping to see the final end of trafficking and slavery in our country.” —Kevin Bales, Author and Co-Founder of Free the Slaves

“Walking Prey is by far the clearest and most compelling assessment I've read on the issue of child sex trafficking in the United States. It addresses the primary questions surrounding the issue and then offers practical points of engagement for those wanting to join the fight against it. I would say it's a leading resource for anyone on the frontlines of protecting the innocence of these children in our nation.” —Morgan Perry, Producer of Sex+Money: A National Search For Human Worth

“A brave and profoundly important book. In an engaging style and with wisdom gained from terrible personal experience, Holly Smith illuminates the issue of child trafficking and offers practical, compassionate, and useful advice for teenagers, parents, and people in the field. Countering the stereotype of the "victim," she shows what sets many children up for abuse. She also illustrates how advertisers and marketers fuel the commercial and sexual exploitation of children and put all children at risk.” —Jean Kilbourne, Ed.D., creator of the Killing Us Softly: Advertising's Image of Women film series