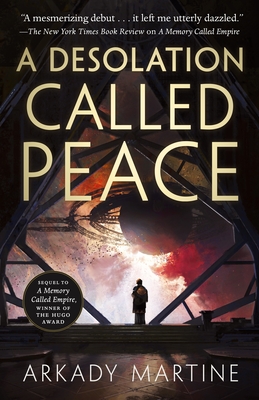 This is book number 2 in the Teixcalaan series.

"[An] all around brilliant space opera, I absolutely love it."—Ann Leckie, on A Memory Called Empire

An alien armada lurks on the edges of Teixcalaanli space. No one can communicate with it, no one can destroy it, and Fleet Captain Nine Hibiscus is running out of options.

In a desperate attempt at diplomacy with the mysterious invaders, the fleet captain has sent for a diplomatic envoy. Now Mahit Dzmare and Three Seagrass—still reeling from the recent upheaval in the Empire—face the impossible task of trying to communicate with a hostile entity.

Their failure will guarantee millions of deaths in an endless war. Their success might prevent Teixcalaan’s destruction—and allow the empire to continue its rapacious expansion.

Arkady Martine (she/her) is the Hugo Award-winning author of A Memory Called Empire. She is a speculative fiction writer and, as Dr. AnnaLinden Weller, a historian of the Byzantine Empire and a city planner. She is currently a policy advisor for the New Mexico Energy, Minerals, and Natural Resources Department, where she works on climate change mitigation, energy grid modernization, and resiliency planning. Under both names, she writes about border politics, rhetoric, propaganda, and the edges of the world. Arkady grew up in New York City and, after some time in Turkey, Canada, and Sweden, and Baltimore, lives in Santa Fe with her wife, the author Vivian Shaw.

“Martine weaves a dramatic and suspenseful story of political intrigue and alien first contact . . . each character is rendered in exquisite detail.”—Booklist, starred review

Praise for A Memory Called Empire

"[A] gorgeously crafted diplomatic space opera . . . Readers will eagerly away the planned sequels to this impressive debut."—Publishers Weekly, starred review

"Politics and personalities blend with an immersive setting and beautiful prose in a debut that weaves threads of identity, assimilation, technology, and culture to offer an exceedingly well-done sf political thriller."—Library Journal, starred review

"This is both an epic and a human story, successful in the mode of Ann Leckie and Yoon Ha Lee. A confident beginning with the promise of future installments that can't come quickly enough."—Kirkus, starred review

"A Memory Called Empire perfectly balances action and intrigue with matters of empire and identity. All around brilliant space opera, I absolutely love it."—Ann Leckie, author of Ancillary Justice

"In A Memory Called Empire, Arkady Martine smuggles you into her interstellar diplomatic pouch, and takes you on the most thrilling ride ever. This book has everything I love: identity crises, unlikely romance, complicated politics, and cunning adventurers. Super-fun, and ultra-fascinating."—Charlie Jane Anders, author of All the Birds in the Sky

“Stunning sci-fi debut. An ambassador from a small space station has to survive in the capital of a galactic empire where everyone seems to want her dead. Add in a great will-they-won’t-they wlw romantic interest. Awesome.”—Rick Riordan, author of the Percy Jackson series

“An elegant and accomplished example of the subgenre of subtle scheming with a background of stars. A delightful read. I couldn’t put it down.”—Jo Walton, Hugo and Nebula award-winning author of Among Others

“A taut murder mystery entwined with questions of technological ethics, A Memory Called Empire is also an evocative depiction of foreignness. Martine creates an elaborate and appealing culture against which to play out this story of political intrigue, assimilation, and resistance. Daring, beautiful, immersive, and often profound.”—Malka Older, author of Infomocracy

“A Memory Called Empire is a murder mystery wrapped up in a political space opera, and deeply immerses the reader in a unique culture and society. I very much enjoyed it and look forward to what Martine does next.”—Martha Wells, author of The Murderbot Diaries

"A cunningly plotted, richly imagined tale of interstellar intrigue that does something new with space opera."—Ken MacLeod

"A Memory Called Empire . . . is so frigging good. It's like a space opera murder mystery combined with all the political parts of Dune."—Dan Wells, author of I Am Not a Serial Killer