All You Need Is Ears: The Inside Personal Story of the Genius Who Created the Beatles (Paperback) 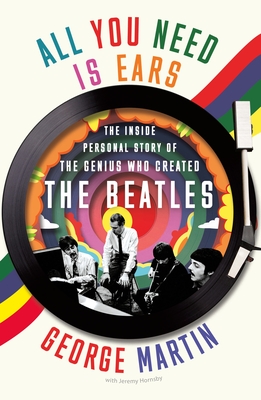 All You Need Is Ears: The Inside Personal Story of the Genius Who Created the Beatles (Paperback)

In All You Need is Ears, legendary Grammy Award-winning and Academy Award-nominated record producer George Martin shares tales from his life and musical career with the Fab Four.

"George," he said, "I don't know if you'd be interested, but there's a chap who's come in with a tape of a group he runs. They haven't got a recording contract, and I wonder if you'd like to see him and listen to what he's got?"

"Certainly," I said, "I'm willing to listen to anything. Ask him to come and see me."

George Martin spotted the Beatles' talent, and recorded and produced The Fab Four from the start right through to The Beatles Anthology. Often called “the fifth Beatle,” Martin not only produced but also arranged some of the band’s most iconic and distinctive songs, including “Yesterday.” In this witty and charming autobiography, Martin describes exactly what it was like to work in the studio with the Beatles—from their first audition (and his decision to scrap Pete Best on drums) to the wild experimentation of Sgt. Pepper, complete with sound effects, animal noises, and full orchestras in evening dress at the direct request of Paul McCartney.

All You Need Is Ears is an intimate insider’s look at the most important pop group of all time, and how they made the music that changed the world: it’s an inimitable look at the Beatles’ creative process, and at the interplay of genius and practical improvisation that gave them their sound. It’s an indispensable read for Beatle lovers and anyone interested in how the world of popular music really works.

Sir George Martin (1926-2016) was a legendary record producer, arranger and audio engineer. He is best known for working with the Beatles, among many other famous recording artists of the 20th Century. He was made a Commander of the British Empire in 1988 and was awarded a knighthood in 1996.

Based on the strength of his collaboration with actor Pete Murray (One Day I’ll Forget My Trousers), George Martin brought Jeremy Hornsby on board as coauthor of his autobiography, All You Need is Ears.