I Was the President's Mistress!!: A Novel (Paperback) 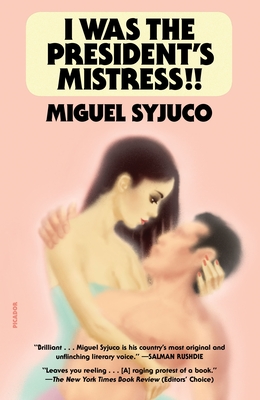 I Was the President's Mistress!!: A Novel (Paperback)

“It’s a rare novel that leaves you reeling simultaneously with admiration, exhaustion, amazement at its author’s reach and skill, and desolation at the world it spreads out before you . . . [A] raging protest of a book.” —James Lasdun, The New York Times Book Review (Editors’ Choice)

From Miguel Syjuco, the winner of the Man Asian Literary Prize for Ilustrado, I Was the President's Mistress!! is an unflinching satire about power, corruption, sex, and all the other topics you were told never to discuss in polite company.

How much would you sacrifice for what you believe?
Is what you believe even true?
And what if you secretly recorded the crimes of your once-trusted lover—who also happens to be the president?

For Vita Nova, introverted megastar, such a conundrum could ruin everything. All she ever wished for was a quiet life as the Philippines’ most-liked influencer, famous for her viral dance hit, the Mr. Sexy-Sexy—yet now somehow she’s headlining a rollicking impeachment and battle royal for power.

In these previously unreleased transcripts, collected by the ghostwriter of her tell-all memoir, Vita rips the bodice of society to bare her own heaving story. But some of her former lovers tell it differently, asking us: “Who’s more sinful, the seduced or the seductress?”

You are cordially invited to this year’s biggest scandal. Will Vita prevail? Will she even survive?

In his signature style—playful, provocative, hilarious, insightful—Miguel Syjuco animates thirteen indelible voices in this dizzying tale of democracy in peril. But this isn’t a book about the Philippines; it’s about a society uncannily like yours.

I Was the President’s Mistress!! is both an indictment of the violent potential of language and an electrifying defense of free speech. Come, confront today’s last taboos and hurtle headlong into love, sex, ambition, politics, faith—and the war over who will tell the stories the world will know as truth.

Miguel Syjuco is a Filipino author, journalist, civil society advocate, and professor at New York University Abu Dhabi. His debut novel, Ilustrado, was a New York Times Notable Book of the Year and won both the Man Asian Literary Prize and the Grand Prize at the Palanca Awards, his country’s top literary honor. He has worked as a contributing opinion writer for The International New York Times, written for many of the world’s most respected publications, and spoken on Philippine politics and culture at the World Forum for Democracy and the World Economic Forum. He currently serves on the advisory councils of the Civitella Ranieri Foundation, an international arts residency program, and the Resilience Fund, a project by the Global Initiative Against Transnational Organized Crime to empower communities most threatened by criminality.

“It’s a rare novel that leaves you reeling simultaneously with admiration, exhaustion, amazement at its author’s reach and skill, and desolation . . . [Syjuco] has fashioned a flexible, pun-riddled argot that adapts itself beautifully to a range of types . . . [A] raging protest of a book . . . That [Vita] is almost certainly the best hope for her country is a chilling notion, all the more so for the resemblance of that tottering republic to our own.” —James Lasdun, The New York Times Book Review (Editors' Choice)

“Syjuco is funny, even as his writing is underpinned by pathos . . . The structure is clever and rewards rereading . . . By spinning actual events through his imagination, Syjuco threads his fictional world with facts so that the novel teeters between satire and grim realism.” —Bryony Lau, The Nation

"In its rapid-fire delivery and cinematic scene-cuts, [I Was the President's Mistress!!] is not unlike those of some of his compatriots such as Gina Apostol, but in its use of monologue and focus on sex, there are also perhaps reflections of Gabriel Garcia Marquez’s Memories of My Melancholy Whores . . . A bravura performance . . . You’re unlikely to read another novel quite like this one, either this year or, in all probability, in several years to come." —Peter Gordon, Asian Review of Books

“[Syjuco] is a ventriloquist of pitch-perfection . . . But it’s not just language that Syjuco nails, it’s his characters’ inner thoughts, too . . . I Was the President’s Mistress!! will repay the [reader’s] effort with an unexpected, twisty story full of extraordinary writerly technique.” —Mark Gamin, The Washington Independent Review of Books

“A brilliant novel that deftly explores the nooks and crannies of the different layers of Philippine society . . . How can the reader not fall in love with [Vita] the way all her men do?. . . We lust for her, we cheer for her. We stand by her as she maneuvers through life’s drug-laced highs and scrounges for leftovers at its lows. And as she climaxes, all we want is a happy ending.” —Yvette Fernandez, Esquire Philippines

“With all the drama of a noon-time telenovela comes a tale that is as complex and complicated as real-life . . . Syjuco’s writing is peppered with references to real people, history, current issues, with a dash of humour too. Add to that his own brand of wit and charm . . . You’ve never read anything like this before.” —Alex Alcasid, Tatler Asia

“Effervescently entertaining . . . A dizzying parody of contemporary Pinoy political history . . . Miguel Syjuco’s grand effort in rendering our country large if specific, not only to the latticework of libido and politics, deserves universal reckoning.” —Alfred A. Yuson, The Philippine Star

“A caustic exposé of the state of the nation . . . I Was the President’s Mistress!! turns up the heat, Syjuco unleashing it to sizzle with lurid sex, Rabelaisian jokes and bacchanalia; douse in vitriol a scandal-lashed government; tear down racists and misogynists; serve as an ironic equal-opportunity goader of assorted belief systems; and scathingly lampoon history’s parade of corrupt Filipino statesmen . . . Comparisons with Ulysses are inevitable . . . It encapsulates a zeitgeist reaching far beyond the Philippines.” —Stephen McCarty, South China Morning Post

“Hilarious witty . . . If you want to know how much our institutions, like the once-venerated Senate, have regressed into a circus of apple knockers, led by kamag-anak (relatives), pugilists, cop killers, media hacks, washed-up movie stars, and Dutertian handymen, then this novel is definitely for you.” —Patricio N. Abinales, Positively Filipino

“One whirlwind of a novel . . . The prose . . . absolutely sings . . . While the novel beautifully plumbs the depths and limits of love, I Was the President’s Mistress!! is, on its face, a satire of Philippine politics, a sensational, scandal-ridden screed . . . The unrelenting monologues are a credit to the author’s commitment to craft and his willingness to understand even the most noxious points of view . . .Still, the novel’s ending provides space for hope.” —Audrey Carpio, ANCx

“As crazy and irresistible as the title suggests . . . An infectious satire of Philippine politics and society . . . Profanely funny . . . It takes narrative guts, real outrage, and sense of design to pull this off. If his first novel felt like Syjuco was still tiptoeing around the conventions of the form, IWTPM!! feels like him just gloriously, fiercely letting loose. For all that, IWTPM!! is more polarising, more powerful, and better than Ilustrado.” —Ruel S. De Vera, Philippine Daily Inquirer

“A fine romp . . . The joy is in the writing, lush and complex, structured in the manner of a mille crepe cake: top layer, the hijinks; slice deeper and taste the vicissitudes and outrages of Philippine society . . . What makes the book a worthwhile read are the serious discourses that show its point is to skewer the powerful and mighty and shake the sleepers awake.” —Jenny Ortuoste, Manila Standard

“[I Was the President’s Mistress!!] has a headlong, assertive energy and a transgressive bent . . . Syjuco’s most irreverent set pieces reveal how cultures can get a woman like Vita exactly backward—rather than the know-nothing sinner she’s dismissed as, she’s the scapegoat for everyone else’s greed and ineptitude . . . Ingenious.” —Kirkus

"Rambunctious, uninhibited satire . . . Those willing to go along for a wild ride ought to be entertained by this tale of dirty tricks and dirty deeds." —Publishers Weekly

“This brilliant black comedy is a wild, and wildly unpredictable, ride through the dark side of the Philippines. Miguel Syjuco is his country’s most original and unflinching literary voice.” —Salman Rushdie, author of Quichotte

"A super-typhoon of a novel. A Babel of rogues, survivors and shape-shifters. A polemic against corruption and greed. A sassy, swerving mini-series, touched by grace and beauty. A Filipino Bonfire of the Vanities for our beleaguered times. An uncompromising work of art." —David Mitchell, author of Utopia Avenue

“An urgent book, and a necessary one: a Tyrants Destroyed for the twenty-first century.” —Tom McCarthy, author of The Making of Incarnation

“Nobody writes like Miguel Syjuco. A triumph.” —Elif Batuman, author of The Idiot

"I Was the President’s Mistress!! is a tour de force. Virtuosic, kinetically funny Miguel Syjuco can riff on just about anything—from celebrity gossip to Internet troll farms, pop music to the Philippine electoral circus—as he explores our era’s thorniest questions of class, gender, power, and violence. At the heart of this blistering satire is Vita Nova, a heroine for the ages, whose rise to fame and epic romantic odyssey stop the breath and stoke the conscience like nothing else I’ve ever read." —Mia Alvar, author of In the Country