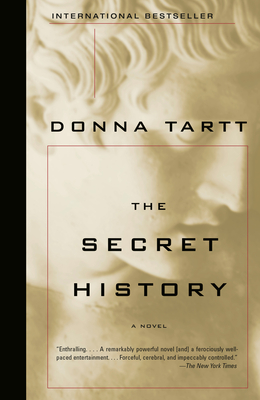 
On Our Shelves Now
A READ WITH JENNA BOOK CLUB PICK • INTERNATIONAL BESTSELLER • A contemporary literary classic and "an accomplished psychological thriller ... absolutely chilling" (Village Voice), from the Pulitzer Prize–winning author of The Goldfinch.

Under the influence of a charismatic classics professor, a group of clever, eccentric misfits at a New England college discover a way of thought and life a world away from their banal contemporaries. But their search for the transcendent leads them down a dangerous path, beyond human constructs of morality.

“A remarkably powerful novel [and] a ferociously well-paced entertainment.... Forceful, cerebral, and impeccably controlled.” —The New York Times
Donna Tartt is the author of the novels The Secret History, The Little Friend, and The Goldfinch. Her work has been published in forty languages and her third novel, The Goldfinch, was awarded the Carnegie Medal and the Pulitzer Prize for Fiction.

“An accomplished psychological thriller ....  Absolutely chilling .... Tartt has a stunning command of the lyrical.” —The Village Voice

“Her writing bewitches us .... The Secret History is a wonderfully beguiling book, a journey backward to the fierce and heady friendships of our school days, when all of us believed in our power to conjure up divinity and to be forgiven any sin.” —The Philadephia Inquirer

“A haunting, compelling, and brilliant piece of fiction .... Packed with literary allusion and told with a sophistication and texture that owes much more to the nineteenth century than to the twentieth.” —The Times (London)