The Third Wheel (Diary of a Wimpy Kid #7) (Hardcover) 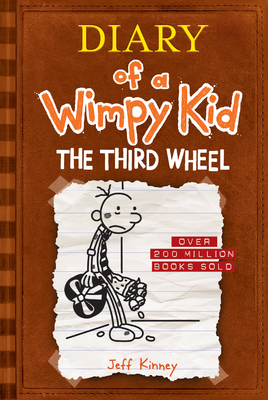 The Third Wheel (Diary of a Wimpy Kid #7) (Hardcover)

This is book number 7 in the Diary of a Wimpy Kid series.

Greg Heffley is not willing to be the odd man out.

A dance at Greg's middle school has everyone scrambling to find a partner, and Greg is determined not to be left by the wayside. So he concocts a desperate plan to find someone—anyone!—to go with on the big night.

But Greg's schemes go hilariously awry, and his only option is to attend the dance with his best friend, Rowley Jefferson, and a female classmate as a "group of friends." But the night is long, and anything can happen along the way. Who will arrive at the dance triumphantly, and who will end up being the third wheel?
Jeff Kinney is a #1 New York Times bestselling author of the Diary of a Wimpy Kid series and the Awesome Friendly Kid series. He is a six-time Nickelodeon Kids’ Choice Award winner for Favorite Book and has been named one of Time magazine’s 100 Most Influential People in the World. He spent his childhood in the Washington, D.C., area and moved to New England, where he and his wife own a bookstore named An Unlikely Story.