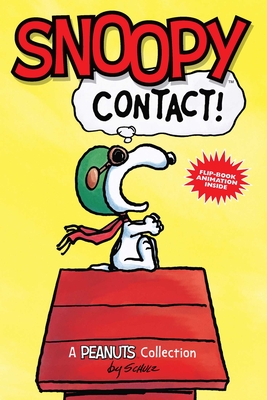 This is book number 5 in the Peanuts Kids series.

Everyone's favorite beagle is back for more classic Peanuts fun in this collection of classic comics featuring some of Snoopy's wildest adventures!

Snoopy is one small dog with one huge imagination! From day to day, he can be found stalking the other Peanuts characters as a fierce ready-to-prey vulture, leopard, mountain lion, piranha, or creature from the sea. But his grandest flights of fancy are when he’s airborne as the Flying Ace on his Sopwith Camel seeking out the evil Red Baron. His forays take him through the World War I French countryside in repeated attempts to achieve his quest.

In Snoopy: Contact!, enjoy his adventures along with his other unusual encounters: catching bird burglars stealing his Van Gogh, challenging Lucy to an arm-wrestling contest, and becoming the Cheshire beagle.
Charles Schulz is a legend. He was the hand and heart behind 50 years of Peanuts, which featured one of the world's most beloved and recognizable cast of cartoon characters, until his death in 2000.