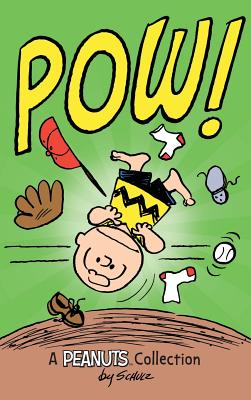 This is book number 3 in the Peanuts Kids series.

Put me in, Coach

The Peanuts gang is ready to play ball in this collection of baseball-themed cartoons. Some of the most popular Peanuts moments happen on the field and they're gathered here for a season full of enjoyment. As manager of the endlessly losing team, Charlie Brown soldiers on to keep his team's spirits up, while being constantly blown off the pitching mound in a clothes-exploding fashion. It doesn't help that his catcher is a musician by nature or that his shortstop is a dog. Not to mention that center-fielder Lucy can't keep her mouth shut long enough to know what's going on in the game Put them all together and you get a game plan for laughs

First published in 1950, the classic Peanuts strip now appears in more than 2,200 newspapers in 75 countries in 25 languages. Phrases such as "security blanket" and "good grief," which originated in the Peanuts world, are now part of the global vernacular, and images of Charles Schulz's classic characters---Charlie Brown kicking the football, Lucy leaning over Schroeder's piano---are now universally recognized.