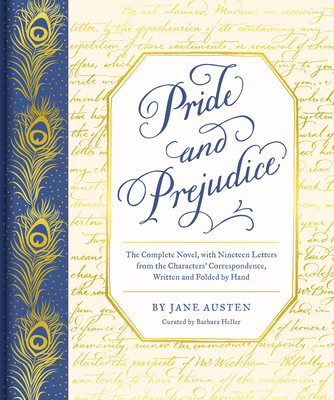 
Usually Ships in 1-5 Days
This special edition invites fans inside the world of Pride and Prejudice with the inclusion of gorgeous, removable replicas of 19 letters from the story.


Step inside the world of Pride and Prejudice, one of the most beloved novels of all time. Jane Austen’s classic tale follows the ups and downs of the relationship between Elizabeth Bennet and Mr. Darcy, two unforgettable characters who come alive in their letters and other writings.

Nothing captures Jane Austen's vivid emotion and keen wit better than her characters' correspondence. As you read this deluxe edition of the novel, you will find pockets throughout containing replicas of all 19 significant letters from the story, re-created with beautiful calligraphy and painstaking attention to historical detail. These powerful epistles include Lydia's announcement of her elopement, Mr. Collins's obsequious missives, and of course Darcy's painfully honest letter to Elizabeth. Pull out each one, peruse its contents, and allow yourself to be transported straight to the drawing room at Netherfield or the breakfast table at Longbourn.

For anyone who loves Jane Austen, and for anyone who still cherishes the joy of letter writing, this book illuminates a favorite story in a whole new way.

BELOVED STORY: Pride and Prejudice has been passed down from generation to generation, and several beloved film adaptions over the years have welcomed new fans to the story. Revisit Austen's original text and experience it in a unique way with physical ephemera that links you directly to the world of Elizabeth and Mr. Darcy.

UNIQUE FORMAT: From the masterful calligraphy to the painstaking attention to historical detail, to the hand-folding of the letters, to the quality of the materials—each book is an object made by fans for fans. This edition offers an immersive experience of the story, stands apart on the shelf, and makes for a truly lovely gift and keepsake. Additional titles in Barbara Heller's meticulously crafted series include Persuasion and Little Women.

NOSTALGIC APPEAL, TIMELESS STORY: Pride and Prejudice is one of the most celebrated novels in the English language, with fervent fans of all ages across many generations. This edition allows longtime fans to experience their beloved novel anew, while inviting first-time readers to lose themselves in the story completely.


Perfect for:
Barbara Heller is a set director for film and television, and writer and director of award-winning short films. She lives in New York City.

“This exquisite book presents the novel’s full text along with 19 letters ‘handwritten’ by Mr. Darcy, Elizabeth Bennet, Caroline Bingley and others. Their notes, complete with appropriate postmarks, are dropped into pouches placed at just the right moments in the story. More than a gimmick, it’s a dramatic way to experience the central role that correspondence plays in the novel.” —The Washington Post Book Club

“The letters in Heller’s edition of Pride and Prejudice are painstakingly detailed, from the style of folding (letters didn’t have envelopes, so they served as their own containers) to the postal markings and wax imprints indicating price, mileage, date, etc.… These letters, with the various character traits that their appearances indicate, can bring 21st-century readers closer to Austen’s world.” —Ted Scheinman, Smithsonian