Drumming Up Business: My Life in Music (Paperback) 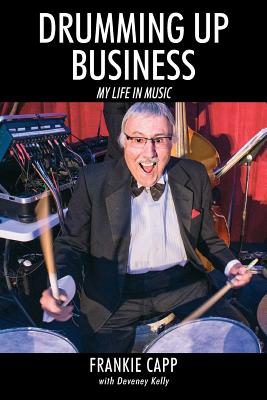 By Frankie Capp, Deveney Kelly (Contribution by)
Unavailable To Order

Working with the BEST Frank Sinatra, Stan Kenton, Benny Goodman, Harry James, Andre Previn, Lalo Schifrin, Lee Holdridge, Terry Gibbs, Phil Spector, Luciano Pavarotti, Steve Allen - just a few of the biggest names in the music world that Frankie has worked with. Sixty years of jazz, big band, rock, classical, movie and television scores means a life of music that has bridged all genres. "Frankie Capp is a great drummer, internationally known for his imagination and technique. It was a pleasure to have worked with him. As an Orchestra Manager, he always brought me the best musicians whether it was for a symphony orchestra, a film/television studio ensemble or jazz band. Most important is the fact that Frankie has been my personal friend for many years. He is a great guy." -Lalo Schifrin. "Frank is a great friend and great musician and we have been fortunate to have shared many remarkable, musical adventures together " -Lee Holdridge. "Frankie Capp worked for me in a gang of different settings. He played the heck out of the drums in my quartets, played all of the TV shows that I conducted as the Musical Director for Steve Allen and really had to play the heck out of other drums when he had to follow Mel Lewis in The Dream Band. He played with the band for about 30 years and played the heck out of the drums. FRANKIE CAPP IS A HECK OF A DRUMMER " -Terry Gibbs. "Frank is one of the real characters of this business. Having been a major part of every aspect of it, his unique take on it offers insight that few are able to match." -Jeff Hamilton.