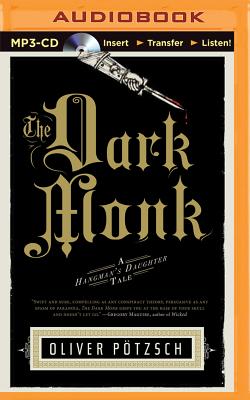 The Dark Monk is the second book in Hangman's Daughter, the million-copy bestselling series.

1660: Winter has settled thick over a sleepy village in the Bavarian Alps, ensuring every farmer and servant is indoors on the night a parish priest discovers he's been poisoned. As numbness creeps up his body, he summons the last of his strength to scratch a cryptic sign in the frost.

Following a trail of riddles, hangman Jakob Kuisl, his headstrong daughter, Magdalena, and the town physician's son team up with the priest's aristocratic sister to investigate. What they uncover will lead them back to the Crusades, unlocking a troubled history of internal church politics and sending them on a chase for a treasure of the Knights Templar.

But they're not the only ones after the legendary fortune. A team of dangerous and mysterious monks is always close behind, tracking their every move, speaking Latin in the shadows, giving off a strange, intoxicating scent. And to throw the hangman off their trail, they have ensured he is tasked with capturing a band of thieves roving the countryside attacking solitary travelers and spreading panic.

Delivering on the promise of the international bestseller The Hangman's Daughter, Oliver P tzsch takes us on a whirlwind tour through the occult hiding places of Bavaria's ancient monasteries. Once again based on prodigious historical research into P tzsch's family tree, The Dark Monk brings to life an unforgettable, compassionate hangman and his tenacious daughter, painting a robust tableau of seventeenth-century Bavaria and quickening our pulses with a gripping, mesmerizing mystery.