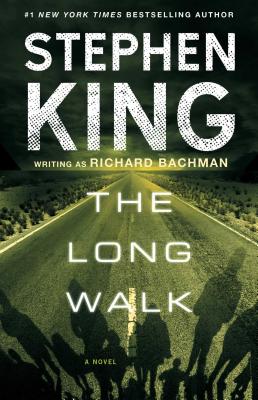 
Usually Ships in 1-5 Days
In this #1 national bestseller, “master storyteller” (Houston Chronicle) Stephen King, writing as Richard Bachman, tells the tale of the contestants of a grueling walking competition where there can only be one winner—the one that survives.

In the near future, when America has become a police state, one hundred boys are selected to enter an annual contest where the winner will be awarded whatever he wants for the rest of his life. Among them is sixteen-year-old Ray Garraty, and he knows the rules—keep a steady walking pace of four miles per hour without stopping. Three warnings and you’re out—permanently.

A “psychologically dark tale with commentary on society, teenage life, and cultural entertainment, The Long Walk is still poignant decades after its original publication” (Publishers Weekly). This edition features an introduction by Stephen King on “The Importance of Being Bachman.”
Stephen King is the author of more than sixty books, all of them worldwide bestsellers. His recent work includes Fairy Tale, Billy Summers, If It Bleeds, The Institute, Elevation, The Outsider, Sleeping Beauties (cowritten with his son Owen King), and the Bill Hodges trilogy: End of Watch, Finders Keepers, and Mr. Mercedes (an Edgar Award winner for Best Novel and a television series streaming on Peacock). His novel 11/22/63 was named a top ten book of 2011 by The New York Times Book Review and won the Los Angeles Times Book Prize for Mystery/Thriller. His epic works The Dark Tower, It, Pet Sematary, Doctor Sleep, and Firestarter are the basis for major motion pictures, with It now the highest-grossing horror film of all time. He is the recipient of the 2020 Audio Publishers Association Lifetime Achievement Award, the 2018 PEN America Literary Service Award, the 2014 National Medal of Arts, and the 2003 National Book Foundation Medal for Distinguished Contribution to American Letters. He lives in Bangor, Maine, with his wife, novelist Tabitha King.