Microbe Hunters: The Classic Book on the Major Discoveries of the Microscopic World (MP3 CD) 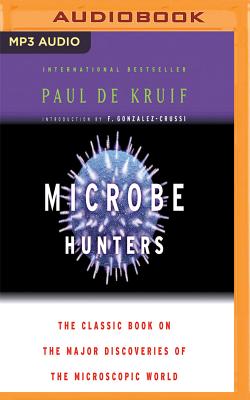 Microbe Hunters: The Classic Book on the Major Discoveries of the Microscopic World (MP3 CD)

This science classic by Paul de Kruif chronicles the pioneering bacteriological work of the first scientists to see and learn from the microscopic world.

Paul de Kruif's Microbe Hunters is a timeless dramatization of the scientists, bacteriologists, doctors, and medical technicians who discovered microbes and invented the vaccines to counter them. De Kruif reveals the now seemingly simple but really fundamental discoveries of science - for instance, how a microbe was first viewed in a clear drop of rain water, and when, for the first time ever, Louis Pasteur discovered that a simple vaccine could save a man from the ravages of rabies by attacking the microbes that cause it.