Be Your Own Manager: A Career Handbook for Classical Musicians (Paperback) 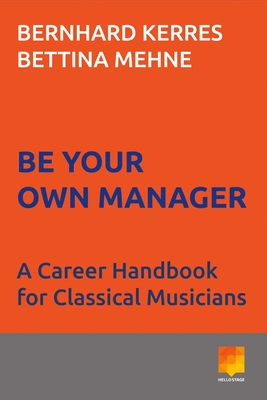 Be You Own Manager is a career handbook for classical musicians, singers, conductors, and others making music their profession. The book contains the basics in understanding the business side of the industry for both young as well as experienced classical musicians. It contains chapters on marketing, how to use social media, fee negotiations and much more. Every chapter includes practical examples to make it both easily understandable and implementable.The book starts with a discussion on what makes a musician special and stand out in a crowd, and how to communicate that presence. This is the core of building a successful career. Later in the book, Bernhard and Bettina discuss how to build a recognizable digital presence, including website tips and how to do a newsletter the right way. The book also includes a chapter on what visual materials should look like, what crowdfunding is, and how to publish that all important first album.?The book aims to cover all aspects that are critical for the self-management of classical musicians. It will be written to be a good read at any level, but also be written to serve as a reference when musicians come across certain opportunities in their career.

Bernhard Kerres fell in love with classical music starting in early childhood. Living in Vienna, he was brought up with the Vienna Philharmonic and the Vienna State Opera. He started his career as an opera singer and sang, among other places, in the studio of the Opera Zurich with José Carreras, Agnes Baltsa and others. Later following his interest in technology, he joined the strategy consulting firm Booz & Co after his MBA at London Business School. From there he was recruited into C-level positions of two large European tech firms. He served on the board of classical music institutions and advised them before he was named CEO and Artistic Director (Intendant) of the Wiener Konzerthaus in 2007, which he led for six years. In 2013, he followed his dream combining his passion for classical music with his fascination for technology, and founded HELLO STAGE, the largest classical music community online.Bernhard was awarded the Austrian Cross for Science and Art and the Chilean Bernardo O'Higgins Order. Bernhard regularly speaks and publishes on innovation, entrepreneurship and leadership.Bettina Mehne descends from a violin maker's family in Berlin. She studied musicology and history of Art alongside working in the offices of the Deutsche Symphonie-Orchester Berlin and the Berliner Festwochen. Upon graduation, she joined the touring department of Harrison Parrott in London. In 1999, she opened the German office of Van Walsum Management within the Konzertdirektion Schmid before joining Die Deutsche Kammerphilharmonie Bremen in 2001 as their Artistic Manager. Having headed the artistic planning at the Wiener Konzerthaus for six seasons, Bettina left at the end of the 2012/13 season together with the then Intendant Bernhard Kerres to cofound with him the new venture HELLO STAGE.