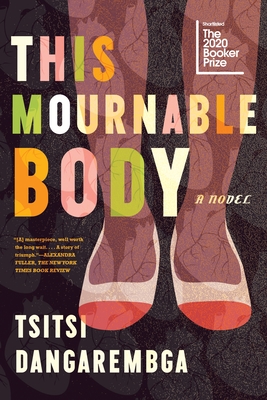 SHORTLISTED FOR THE 2020 BOOKER PRIZE

A searing novel about the obstacles facing women in Zimbabwe, by one of the country’s most notable authors

Anxious about her prospects after leaving a stagnant job, Tambudzai finds herself living in a run-down youth hostel in downtown Harare. For reasons that include her grim financial prospects and her age, she moves to a widow’s boarding house and eventually finds work as a biology teacher. But at every turn in her attempt to make a life for herself, she is faced with a fresh humiliation, until the painful contrast between the future she imagined and her daily reality ultimately drives her to a breaking point.

In This Mournable Body, Tsitsi Dangarembga returns to the protagonist of her acclaimed first novel, Nervous Conditions, to examine how the hope and potential of a young girl and a fledgling nation can sour over time and become a bitter and floundering struggle for survival. As a last resort, Tambudzai takes an ecotourism job that forces her to return to her parents’ impoverished homestead. It is this homecoming, in Dangarembga’s tense and psychologically charged novel, that culminates in an act of betrayal, revealing just how toxic the combination of colonialism and capitalism can be.

Tsitsi Dangarembga is the author of two previous novels, including Nervous Conditions, winner of the Commonwealth Writers’ Prize. She is also the director of the Institute of Creative Arts for Progress in Africa Trust. She lives in Harare, Zimbabwe.

“[A] masterpiece. . . . Dangarembga writes with intimacy and compassion; there’s a sharp poetic crack to the work that keeps the story from muddying in melancholy, as it might in the hands of a less cinematic writer.”—The New York Times Book Review

“[This Mournable Body] brilliantly dramatizes the tragic ironies of life in a country where keeping yourself afloat may mean swallowing your pride.”—The New Yorker

“Dangarembga gives us something rare: a sparkling antiheroine we find ourselves rooting for.”—The Washington Post

“The novel explores how race, gender, class, and age are at play in Zimbabwe, and the overwhelming strength of these forces in the face of even the most optimistic and ambitious women.”—Vanity Fair

“A harrowing psychological journey. . . . Like the period of Zimbabwe’s history this story is set in, the pain, false hopes and dashed enthusiasms come in large doses, and victory lies at the end of a very long road.”—Chicago Tribune

“[This Mournable Body] is a staggering achievement, ambitious yet compulsively readable, a novel that feels like the culmination of 30 years of work and self-exploration even as it repeatedly shows how a life will always be a work in progress.”—Star Tribune (Minneapolis)

“Through Tambu and her compatriots, Dangarembga investigates the ironic psychological demands of global capitalism on a country whose citizens have been fractured by that system. Complex and flawed, they are more than symbols. This Mournable Body makes their struggles visible.”—Los Angeles Review of Books

“Ultimately, This Mournable Body is a reflection on the past, and how it can define us. Reckoning with horrific acts she’d rather push away, Tambudzai is caught in a struggle between the deep urge to forget and the stifling inability to do so.”—ZYZZYVA

“Awe-inspiring, a depiction of trauma, deterioration, and redemption accomplished with rare potency and grit.”—The Masters Review

“Heartbreaking and piercing. . . . This is a smartly told novel of hard-earned bitterness and disillusionment.”—Publishers Weekly

“A haunting, incisive, and timely glimpse into how misogyny and class strife shape life in post-colonial Zimbabwe.”—Kirkus Reviews