Year of the Dog (A Detective Jack Yu Investigation #2) (Paperback) 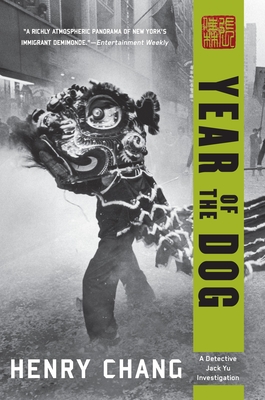 Year of the Dog (A Detective Jack Yu Investigation #2) (Paperback)

This is book number 2 in the A Detective Jack Yu Investigation series.

Jack Yu is one of the few ethnically Chinese officers in the NYPD. Now Jack has been promoted out of the Chinatown Precinct. With multiple murders occurring within days of his transfer, the Ninth Precinct isn’t less violent, per se, but at least Jack doesn’t know most of the perps. When a bloody shootout goes down in Chinatown though, the upper echelons of the NYPD reach out to him for help squelching the escalating gang violence, and Jack learns he cannot get away from Chinatown’s criminals—his old friends—for long.
A lifetime New Yorker, Henry Chang was born and raised in New York’s Chinatown, where he still lives. Chang's writing often focuses on the world of Chinese immigrants. A graduate of CCNY, he is the author of the acclaimed Lucky, Death Money, Red Jade, Year of the Dog and Chinatown Beat, also known as the Detective Jack Yu series.

Henry Chang can be found online at Chinatowntrilogy.com.
Praise for Year of the Dog

Praise for the Jack Yu series

"A vivid, street-level portrait . . . evokes the spirit, sights, smells and language of his setting in compelling and original fashion."
—The New York Times

“Think you know New York? Then let Henry Chang show you around. This is tough crime fiction that reaches into the darkest corners of Chinatown and beyond, written with a deep understanding of the world through which Detective Jack Yu moves, and a soulful compassion for those who inhabit it. Every word has the ring of truth about it.”
—Stuart Neville, author of The Final Silence

“For readers who relish noir suspense, it doesn’t get much better.”
—The Boston Globe

“A classic noir, filled with longing, violence, and that uniquely urban melancholy, but it also brings something new to the table, a loving specificity of a people and place, the multicultures of New York’s Chinatown, that has rarely if ever been encountered in fiction before. A real discovery.”
—Richard Price, New York Times bestselling author of The Whites