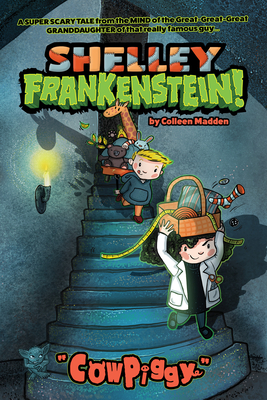 
Coming Soon - Available for Pre-Order Now
Launching a new graphic novel series for young middle-grade readers! Shelley Frankenstein loves to create scary monsters, but for some reason they always turn out cute… until this time.

Shelley Frankenstein is the great-great-great-granddaughter of a pretty famous mad scientist. She loves to be scared, and tries to make creepy creatures to spook all her friends… but all her experiments seem to backfire. The other kids love her adorable creations. What a disappointment!

Finally Shelley and her little brother/assistant, Iggy, stumble upon a haunted graveyard that gives them an idea for the ultimate monster. Throw in a couple abandoned toy animals, and behold… Cowpiggy! Will this new creation send everyone running in terror, like a proper monster? Or will love and cuteness triumph?

There’s twists and turns around every corner in this delightfully upside-down graphic novel for sweet and spooky independent readers from bestselling illustrator Colleen Madden.
The weird fourth kid in a family of 8, Colleen Madden made it through childhood pretending to be a Wookie and doodling in her cardboard box art studio. Colleen spent some time acting and training at The Second City in Chicago, then went on to graduate from a small liberal arts school on the East coast. After twelve years of illustrating picture books (including the bestselling What If Everybody Did That? and Mariah Carey’s All I Want for Christmas Is You), she has branched out to graphic novels with Shelley Frankenstein. Colleen lives and works (and works and works and works) in the Philadelphia area.