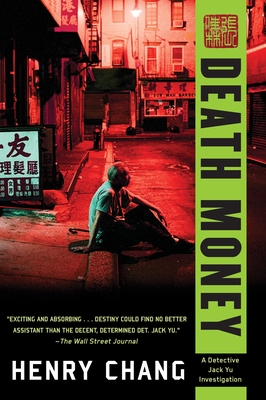 This is book number 4 in the A Detective Jack Yu Investigation series.

When a floater that surfaces in the Harlem River turns out to be Chinese, Yu leaves his downtown precinct to investigate. Yu knocks on the usual doors, and the trail leads to the Gee family, noodle manufacturers who on the surface look like the ideal immigrant success story.

When the body of an unidentified Asian man is found in the Harlem River, NYPD Detective Jack Yu is pulled in to investigate. The murder takes Jack from the benevolent associations of Chinatown to the take-out restaurants, strip clubs, and underground gambling establishments of the Bronx, to a wealthy, exclusive New Jersey borough. It's a world of secrets and unclear allegiances, of Chinatown street gangs and major Triad players. With the help of an elderly fortune teller and an old friend, the unpredictable Billy Bow, Jack races to solve his most difficult case yet.
Henry Chang was born and raised in New York's Chinatown, where he still lives. He is a graduate of CCNY. He is the author of Chinatown Beat, Year of the Dog, and Red Jade, also in the Detective Jack Yu series.

"Exciting and absorbing... Destiny could find no better assistant than the decent, determined Det. Jack Yu."
—The Wall Street Journal

"In his dogged insistence on providing the Chinese word for the Chinese thing, Henry Chang may very well be insisting on the complex reality that lies behind the often tacky face that Chinatown shows to the North American eye."
—Reviewing the Evidence

"An exotic background, plus a solid police procedural story, make this a good read."
—Deadly Pleasures

"The best Jack Yu mystery yet! Death Money is a lightning-speed sordid tale that travels through the dark alleys of bygone New York City Chinese restaurants. Chester Himes, the master of Harlem mysteries, would have been proud."
—Naomi Hirahara, Edgar Award-winning author of Murder on Bamboo Lane and the Mas Arai mystery series

"Lydia Chin fans: If you don't know the Chinatown of Henry Chang's Jack Yu, I think you want to. If you do, I know you want this book! "
—S.J. Rozan, author of the Lydia Chin series

“Think you know New York? Then let Henry Chang show you around. This is tough crime fiction that reaches into the darkest corners of Chinatown and beyond, written with a deep understanding of the world through which Detective Jack Yu moves, and a soulful compassion for those who inhabit it. Every word has the ring of truth about it.”
—Stuart Neville, author of The Final Silence

"Chang's writing is clear and fluid, without padding or melodramatics... Jack's saga is compelling and non-formulaic crime fiction, but also a glimpse into the closed world of an Asian diaspora."
—International Noir Fiction

“What raises the book to a level far beyond an above-average mystery is Chang’s intricate and intimate knowledge of the geography and culture of New York’s Chinatown, from the alleys that the tourists rarely visit and never notice to the transactional interplay that takes place in plain view yet is unobserved by all but the area’s inhabitants… One of the most compelling and riveting novels you will read this year.”
—Bookreporter

"The depiction of a Chinatown that tourists don’t see (e.g., seedy strip clubs) sets this apart from other gritty police procedurals."
—Publishers Weekly

"[A] sensitive exploration of the Chinese American community, from its rival gangs to its generational differences. Another brisk police procedural with a protagonist who manages to bridge two cultures."
—Booklist

"Takes the reader on a tour through the Chinese communities in New York’s five boroughs that is frightening, fascinating and not a little enlightening."
—The Toronto Star

"For readers who relish noir suspense, it doesn't get any better than this stunning novel."
—Boston Globe

"[Chang] paints, in miniature, a harsh world of neon and shadows but doesn't slight the Big Questions.... [He takes] genre fiction to a deeper level, focusing on the mysteries of the human mind that a murder brings to light in those with some connection to the deceased. Mysteries, quirks, that might otherwise lie buried, but that subtly define who we are."
—Ron Rosenbaum, Slate

"An action-packed plot and a carefully detailed mystery make this a feast for readers who crave insight into the cultural melting pot that is the United States."
—Library Journal, Starred Review

"Chang captures the sights, sounds and smells of the various Chinatowns, showing the common threads and uniqueness of each as well as their histories ... A gripping police procedural full of surprising twists."
—Kansas City Star

"Chinatown is the hero here. Better say antihero, because while the picture is vivid and often compelling, it's anything but pretty."
—Kirkus Reviews

"This is a dense, moody, and intelligent glimpse at Chinese life in New York as seen through the world-weary eyes of a young man with a foot firmly planted in two cultures."
—Booklist