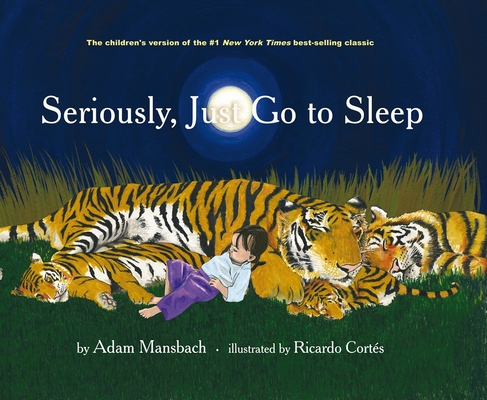 Now there's a version, complete with more of the gorgeous, yet weirdly subversive illustrations. The best part? It's still funny. The rhythms, the plodding rhymes, the illustrations, the clever play on the overused trope of the world at bedtime -- they all work together to take Seriously, Just Go to Sleep beyond parody and into the realm where good children's books belong: things that parents, and children, can honestly come to from different places and enjoy together. I can imagine reading Seriously, Go to Sleep nightly, and even to the point where you're begging the child to choose something else (the ultimate compliment for a picture book) and yet still finding something to enjoy. It captures a different 'zeitgeist' of modern parenting.
--New York Times From the team that touched off the irreverent humor trend Go the F**k to Sleep, author Adam Mansbach and illustrator Ricardo Cortes, comes a new kid-friendly version of their instant comic classic. Seriously, Just Go to Sleep brings children in on the joke, helping them understand their own tactics and why their parents just want them to go . . . to sleep.
--Publishers Weekly Critical success for the original Go the F*** to Sleep, a #1 best seller at: New York Times, Amazon.com, Wall Street Journal, Publishers Weekly, and many more Seriously, Just Go to Sleep is the G-rated, traditional-sized, children's version of the book every parent has been talking about. Go the F*** to Sleep, the picture book for adults, became a cultural sensation by striking a universal chord for parents. Now, Adam Mansbach and Ricardo Cort's reunite with Seriously, Just Go to Sleep, inviting the children themselves in on the joke. As parents know, kids are well aware of how difficult they can be at bedtime. With Cort s's updated illustrations (including a cameo appearance by Samuel L. Jackson, who narrated the audio book version of Go the F*** to Sleep) and Mansbach's new child-appropriate narrative, the book allows kids to recognize their tactics, giggle at their own mischievousness, and empathize with their parents' struggles--a perspective most children's books don't capture. Most importantly, it provides a common ground for children and their parents to talk about one of the most stressful aspects of parenting. Seriously, Just Go to Sleep came to be when Mansbach read a highly censored rendition of the original book to his three-year-old daughter, and she recognized herself as the culprit and was delighted. We were getting a lot of feedback from parents, saying that their kids loved the book--read in an altered form--because they recognized themselves in the character of the mischievous kid who's winning the bedtime battle, and thought it was hilarious. So we figured we'd do a companion volume that lets kids in on the fun.

Praise for the original Go the F*** to Sleep:

"What makes this latest book seductive is not so much its profanity as its articulation of verboten thoughts . . . letting parents off the hook for their self-recrimination and guilt over bedtime seems the most cathartic tonic." --New York Times

"A parenting zeitgeist . . . A phenomenon that has stunned the publishing world and may just redefine the modern 'parenting' market."
--Washington Post

"Nothing has driven home a certain truth about my generation, which is approaching the apex of its childbearing years, quite like this deranged book." --The New Yorker

"Perfectly timed, lightly applied touches of profanity are funny. Super funny. It's especially the case when the profanity puts words to common feelings that we aren't really allowed to own up to. Well, in that spirit comes this perfect little picture-book parody." --Booklist

"Its simple genius is that it's written in the inner voice of a tired, scrambling parent and in the style of the books they have to read over and over again, which are also driving them slowly insane." --The Australian

"Adam Mansbach has taken a bold step in writing a book that totally understands an unspoken part of parenthood."
--Seattle Post-Intelligencer

"I can only wish that this book had been written when I was struggling through sleepless nights and ghastly bedtimes with my little dears! I think that any parent with young children will recognize the tone of voice in which this book is written--recognizing the frantic desperation and ever present guilt suffered by parents . . . Go the F*** to Sleep is a refreshing shot of reality." --BlogCritics.org

"Anyone who has ever had a newborn, an infant, a baby, a toddler, a preschooler . . . oh, heck, anyone who has ever known a young child will understand the impetus behind Adam Mansbach's runaway best seller and 'children's book for adults.'" --Shelf Awareness

"Go the F*** To Sleep by Adam Mansbach is probably the best children's book since Goodnight Moon, and it only gets better when read by Samuel L. Jackson." --Huffington Post

"Part of its appeal is the barbed send-up of a normally saccharine genre, but Go the F*** to Sleep is not, at base, a parody. It's more like what Wicked is to The Wizard of Oz--a book that tells a familiar story from the perspective of a previously marginalized character."
--New York magazine

"By far the most funny, spot-on, gut-splitting picture book ever written (and that's not hyperbole), Go the F*** to Sleep made me laugh so hard I cried-from more than one orifice . . . Author Adam Mansbach is a genius. Why? Because he tells the truth and does it in such a sneaky creep-up-and-bite-you way." --New York Journal of Books

"The book's underlying message is that today's parents should cut themselves some slack." --Ottawa Citizen

"One book whose buzz began weeks ago and kept rising after its PDFs went viral, the wildly titled Go the F*** to Sleep . . . is still going strong. Dave Mallman, a bookseller at the Next Chapter, called it a 'stroke of genius that irreverently expresses the frustrations all parents face when dealing with our beloved but exasperating children.'" --PW Daily

"Studies have shown that children's sleeping patterns may dictate their parents' functioning, quality of life and marital happiness. And, given how most parents have to deal with a sleepless kid at some point--an issue for which there seem to be few easy solutions--maybe laughing a little to let off steam isn't a half-bad way to deal." --Los Angeles Times