Primus, Over the Electric Grapevine: Insight Into Primus and the World of Les Claypool (Hardcover) 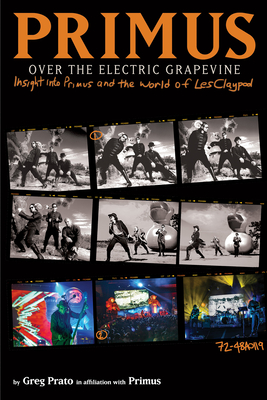 Primus, Over the Electric Grapevine: Insight Into Primus and the World of Les Claypool (Hardcover)

Usually when the "alternative rock revolution" of the early 1990s is discussed, Nirvana's Nevermind is credited as the recording that led the charge. Yet there were several earlier albums that helped pave the way, including the Pixies's Doolittle, the Red Hot Chili Peppers's Mother's Milk, Jane's Addiction's Nothing's Shocking, and especially Primus's 1991 album Sailing the Seas of Cheese.

This fascinating and beautifully curated oral history tells the tale of this truly one-of-a-kind band. Compiled from nearly fifty all-new interviews conducted by journalist/author Greg Prato--including Primus members past and present and many more fellow musicians--this book is sure to appeal to longtime fans of the band, as well as admirers of the musicians interviewed for the book.

Tommy the Cat. Jerry Was a Race Car Driver. My Name Is Mud. Yessiree, Primus is responsible for some of the most cutting edge and original rock music of the 1990s. Although originally formed in 1984, it was not until shortly before the end of the decade that the classic Primus lineup featuring Les Claypool (bass/vocals), Larry LaLonde (guitar), and Tim Alexander (drums) was solidified. With most hard rock/heavy metal acts at the time either neatly falling into either thrash or glam categories, Primus joined a variety of underground bands that refused to be pigeonholed (and by the early '90s, had fully infiltrated the mainstream)--merging metal, funk, alternative, punk, country, roots rock, and experimental music, along with Claypool's penchant for witty and often humorous storytelling lyrics. Building a large and loyal following first in and around San Francisco (before eventually, going global), Primus kicked things off with a string of releases that are now considered classic alt-rock titles: Suck on This, Frizzle Fry, Sailing the Seas of Cheese, Pork Soda, and Tales from the Punchbowl. Along the way, Primus toured with some of rock's biggest names (Jane's Addiction, Public Enemy, Rush, U2, etc.), headlined the third Lollapalooza Festival, and issued a variety of crafty music videos, which stood out in sharp contrast to the ultra seriousness of most other video clips at the time. Primus, with Greg Prato, is the coauthor of Primus, Over the Electric Grapevine: Insight into Primus and the World of Les Claypool. Greg Prato is a Long Island-based music journalist, whose writing has appeared in Rolling Stone. He is the author of numerous books, including A Devil on One Shoulder and an Angel on the Other: The Story of Shannon Hoon and Blind Melon, Grunge Is Dead: The Oral History of Seattle Rock Music, and MTV Ruled the World: The Early Years of Music Video. He is the coauthor, with Primus, of Primus, Over the Electric Grapevine: Insight into Primus and the World of Les Claypool.