Long Title: Looking for the Good Times; Examining the Monkees' Songs, One by One (hardback) (Hardcover) 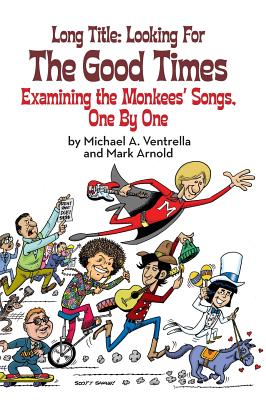 Long Title: Looking for the Good Times; Examining the Monkees' Songs, One by One (hardback) (Hardcover)

By Michael A. Ventrella, Mark Arnold, Jerry Beck (Foreword by)

"Here we come. Walking down the street. We get the funniest looks from everyone we meet. Hey, hey, we're The Monkees "

The idea of creating a tv series about a wacky rock group similar to The Beatles had been unsuccessfully kicked around Universal Pictures and Columbia Pictures since 1962, but by 1965, The Beatles were on their second tour, and their Help album, single, and tour created a popularity wave called Beatlemania. The enormous success of their A Hard Day's Night album and single convinced Screen Gems to green light the tv series idea, and The Monkees were born.

A fake band seemed odd in the real world still reeling from race riots, John F. Kennedy's assassination, and the Vietnam War, but delightful Davy Jones, peppy Peter Tork, madcap Micky Dolenz, and comparatively serious Michael Nesmith were too busy singing to bring anybody down. Fake became steak by late 1966, and with help from super musicians Tommy Boyce, Bobby Bart, Neil Diamond, Chip Douglas, Carole King, John Stewart, and others, the series skyrocketed to hit status along with #1 music albums and hit singles, such as "The Last Train to Clarksville," "I'm Not Your Steppin' Stone," and "I'm a Believer."

Authors Michael A. Ventrella and Mark Arnold now analyze all The Monkee's songs and albums produced over 50 years. Discover the band's detailed history, a listing of all live performances and TV appearances, and a listing of all of their singles and albums that made the Billboard charts.

Come and watch them sing and play. Discover the secrets of their recordings: which of The Monkees played what instruments on each song, when it was recorded, how well that song did on the charts, whether there were any interesting cover versions of the song done, and when it first appeared on a record.

About author Mark Arnold: a well-known historian of pop culture, he is also author of
The Best of the Harveyville Fun Times ; Created and Produced by Total TeleVision productions; Mark Arnold Picks on The Beatles; Frozen in Ice: The Story of Walt Disney Productions; Think Pink: The Story of DePatie-Freleng; Pocket Full of Dennis the Menace

About author Michael A. Ventrella: a musician, who was tremendously inspired by The Monkees, has published or edited Arch Enemies; The Axes of Evil; Bloodsuckers: A Vampire Runs for President; and the Tales of Fortannis series.