Nobody Is Protected: How the Border Patrol Became the Most Dangerous Police Force in the United States (Hardcover) 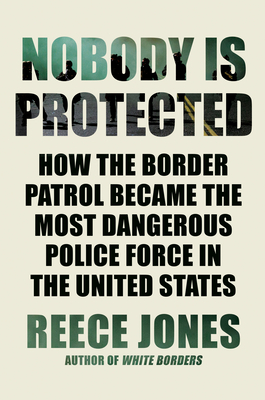 Nobody Is Protected: How the Border Patrol Became the Most Dangerous Police Force in the United States (Hardcover)


Usually Ships in 1-5 Days
An urgent look at the U.S. Border Patrol from its xenophobic founding to its assault on the Fourth Amendment in its quest to become a national police force

Late one July night in 2020, armed men, identified only by the word POLICE written across their uniforms, began snatching supporters of Black Lives Matter off the street in Portland, Oregon, and placing them in unmarked vans. These mysterious actions were not carried out by local law enforcement or even right-wing terrorists, but by the U.S. Border Patrol. Why was the Border Patrol operating so far from the boundaries of the United States? What were they doing at a protest that had nothing to do with immigration or the border?

Nobody Is Protected: How the Border Patrol Became the Most Dangerous Police Force in the United States is the untold story of how, through a series of landmark but largely unknown decisions, the Supreme Court has dramatically curtailed the Fourth Amendment of the Constitution in service of policing borders. The Border Patrol exercises exceptional powers to conduct warrantless stops and interrogations within one hundred miles of land borders or coastlines, an area that includes nine of the ten largest cities and two thirds of the American population.

Mapping the Border Patrol’s history from its bigoted and violent Wild West beginnings through the legal precedents that have unleashed today’s militarized force, Guggenheim Fellow Reece Jones reveals the shocking true stories and characters behind its most dangerous policies. With the Border Patrol intent on exploiting current laws to transform itself into a national police force, the truth behind their influence and history has never been more important.
REECE JONES is a Guggenheim Fellow. He is a professor and the chair of the Department of Geography and Environment at the University of Hawai'i. He is the author of three books, the award-winning Border Walls and Violent Borders, as well as White Borders. He is the editor in chief of the journal Geopolitics and he lives in Honolulu with his family.

"Reece Jones had done us all a service in reporting on how a federal police agency has grown way larger than it needs to be, has accumulated more power than it requires to do its job, and has used that power to feed itself, to the detriment of the nation . . . It is a dark portrait, but hopefully, by Jones shining some light on it, changes might be prompted that can rein in the beast before it devours what rights we have left." —Coot's Reviews

"This eye-opening read concludes with signs of hope and suggestions for change." —Booklist

"This well-researched account is disturbing in its demonstration of the unwitting complicity between the American justice system and an organization born of racist violence . . . A provocative, necessary book about an ongoing hot-button topic." —Kirkus Reviews

"Incisive . . . Enriched by the author’s brisk prose and lucid analysis of complex legal matters, this is a troubling look at what Americans have sacrificed in the name of border security." —Publishers Weekly

“For decades, the U.S. Border Patrol has been violating people’s civil rights in the name of national security including implementing security policies that have been responsible for the deaths of thousands. Nobody Is Protected is a page-turning deep dive into the history of America’s largest police force. In riveting prose, Jones sheds an important light on just how vulnerable citizens and non-citizens alike are to federal overreach and law enforcement abuse.” —Jason De León, MacArthur Fellow and author of The Land of Open Graves

"Reece Jones has done something here surprising, illuminating, and, frankly, terrifying. By diving deeper into an issue which has received much attention but lacked a more critical eye, he has presented us with a portrait of how our fears and prejudices about immigration have metastasized into a pressing situation that demands redress. A harrowing, necessary read." —Jared Yates Sexton, author of American Rule

“If you wondered how it could be possible for the U.S. Border Patrol to pull activists off the streets in Portland, Oregon during the summer of 2020, Nobody is Protected is the book for you. Reece Jones's rigorously researched book analyzes the Border Patrol’s extraconstitutional powers and explains the legal precedents behind it. It's also one hell of a page-turner that twists and turns from the 'Wild West' to the modern halls of power. It is a book with a purpose: always seeking to answer how the U.S.’s 'most dangerous police force' presently operates and how it impacts us all." —Todd Miller, journalist and author of Build Bridges, Not Walls