A Disappearance in Fiji (Hardcover) 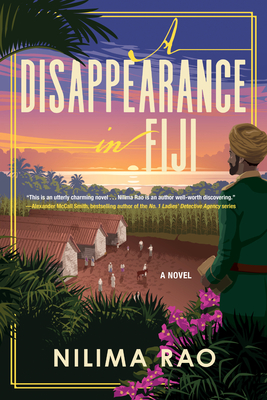 A Disappearance in Fiji (Hardcover)

1914, Fiji: Akal Singh would rather be anywhere but this tropical paradise—or, as he calls it, “this godforsaken island.” After a promising start to his police career in his native India and Hong Kong, Akal has been sent to Fiji as punishment for a humiliating professional mistake. Lonely and grumpy, Akal plods through his work and dreams of getting back to Hong Kong.

When an indentured Indian woman goes missing from a sugarcane plantation and Fiji’s newspapers scream “kidnapping,” the inspector-general reluctantly assigns Akal the case, giving him strict instructions to view this investigation as nothing more than cursory. Akal, eager to achieve redemption, agrees—but soon finds himself far more invested than he could have expected.

Now not only is he investigating a disappearance, but also confronting the brutal realities of the indentured workers’ existence and the racism of the British colonizers in Fiji—along with his own thorny notions of personhood and caste. Early interrogations of the white plantation owners, Indian indentured laborers, and native Fijians yield only one conclusion: there is far more to this case than meets the eye.

Nilima Rao’s sparkling debut mystery offers an unflinching look at the evils of colonialism, even as it brims with wit, vibrant characters, and fascinating historical detail.
Nilima Rao is a Fijian Indian Australian who has always referred to herself as “culturally confused”. She has since learned that we are all confused in some way and now feels better about the whole thing. When she isn’t writing, Nilima can be found wrangling data (the dreaded day job) or wandering around Melbourne laneways in search of the next new wine bar.
Praise for A Disappearance in Fiji

“A poignant and entertaining read . . . Sergeant Akal Singh is a charmingly imperfect and captivating protagonist. I love Akal and hope we’ll be seeing a lot more of him!”
—Ovidia Yu, author of the Aunty Lee Singaporean Mysteries

“A marvelous debut that beautifully paints life in a part of the world that few of us have a chance to visit. The highlight of Nilima Rao’s well-crafted novel set in Fiji in the days of British colonial rule is the collision of cultures and class and how one man is charged with the task of unlocking the mysteries they create. A pleasure to read.”
—Colin Cotterill, author of the Dr. Siri Paiboun Mysteries